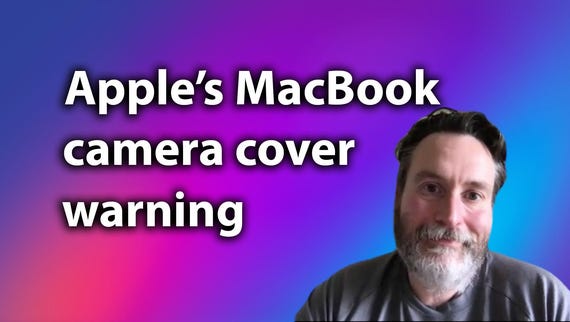 Earlier this month, Apple published a support document that warned MacBook owners against closing their laptop with a camera cover fitted. And just as with the whole wearing masks in public debate, some people don't like being told what to do, even it is for their own good.

First off, some clarity.

Apple didn't say, "don't use a camera cover." Apple clearly said: "Don't close your MacBook, MacBook Air, or MacBook Pro with a cover over the camera."

Apple even went on to clarify the issue:

"If you close your Mac notebook with a camera cover installed, you might damage your display because the clearance between the display and keyboard is designed to very tight tolerances. Covering the built-in camera might also interfere with the ambient light sensor and prevent features like automatic brightness and True Tone from working."

I spoke to an Apple repair technician, who, on condition of anonymity, gave ZDNet a rundown of the problem.

"What we've been told is that since people have started to work and study from home more, the use of camera covers has gone up dramatically," the repair tech told me. "It makes sense, people are using video more and more, and it can feel intrusive, so being able to slide a cover across the camera offers some privacy even mid-meetings where people might not want to disconnect. But consequently, the number of screen breakages are up. And it's a pretty distinctive screen break -- leaving a glowing white line down the middle of the display -- so we know why it's happened even if people are evasive about how the damage happened."

Another reason is tighter tolerances.

"That new 16-inch MacBook Pro has the thinnest bezel I've seen," the veteran tech said, and they've been doing this job for a number of years and has handled pretty much everything Apple has made during that time. "It's almost non-existent, and anything that gets in-between the screen and the body can break the display in a heartbeat. They do, they just go 'pop' and the damage is done."

"Only the other day, I saw a display that had been cracked when someone has closed a coin on it. Left a nice print of the coin on the display. The owner told me 'it just happened on its own'… hmmm, OK."

Must read: Five iPhone security settings you should check today

And it's not just camera covers that are the problem.

"We see MacBooks come in with all sorts of junk stuck over the camera," the technician told me, "from gum stickers. In the very early days of the pandemic, I had a chap come in with a MacBook where he'd enthusiastically glued a bit of plastic over the camera and now wanted it to work because his boss was going to be using Zoom more. It wasn't going to come off, and it was cheaper for him to buy a webcam than have the display replaced."

"Oh, and there was this other one," they reminisced. "It had a Band-Aid on over the camera. And it looked used. Hmmm."

Apple's support document includes information for those who need to use camera covers, and it states that the camera cover must not be thicker than an average piece of printer paper (0.1mm) and shouldn't leave adhesive residue. Owners who use a camera cover that is thicker than 0.1mm are warned to remove it before closing the laptop.

There is, however, some good news in all this if you have busted your display.

"Yes, AppleCare+ covers this damage," the technician confirmed. "Without that, a display replacement is a seriously expensive repair job, especially on that new 16-inch MacBook Pro."

Join Discussion for: The real reason Apple is warning users about...