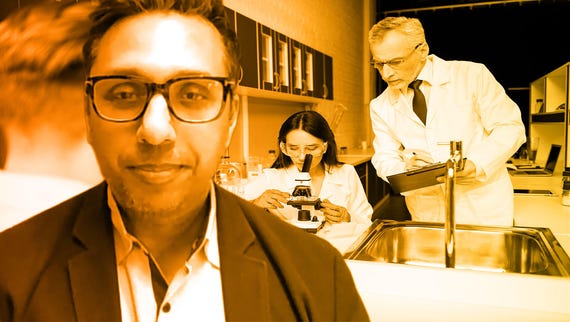 Surgical robots are now a standard part of the medical team working in the operating theatre. But, despite being called robots, these machines aren't independent - they're still entirely under the control of the doctor operating them, who wields tools and cameras to perform minimally invasive surgery with the help of their machine assistant. A project in Australia, however, could be the start of a new direction in robotic surgery.

Researchers at the Australian Centre for Robotic Vision, part of the Queensland University of Technology (QUT), have been working on the concepts of surgical snakebots since 2015, with the aim of creating more flexible instruments for robotic surgery.

After sitting in on knee operations -- arthroscopies, where surgeons perform keyhole surgeries to investigate and repair joints -- the QUT team saw there was a need for new tools that could go around corners and fit into the tight spaces of the knee, just a few millimetres wide, rather than the straight, inflexible instruments that are more commonplace in theatres.

The first iteration of the QUT snakebot was a single piece of hardware, formed of pieces of metal that would telescope inside each other and could be extended to form a curve. While the original bot fitted the curved-tool brief, it didn't offer curves that were tight enough for the extremely narrow confines of the knee or the ability to turn around corners, something needed for the tool to reach certain parts of the knee joint.

Now, the researchers are taking a fresh look at the snakebots, reinventing their serpentine hardware using a version of the principles of evolution -- as seen through the lens of AI.

While the early snakebot was a one-size-fits-all offering, the new generations of snakebots are designed to be as individual as the patients that they'll be used on.

"We think that's the most unique thing about the research. People have made all sorts of snakebots before, of course, but this concept is about making a snakebot for every patient and for each of their operations. It's a completely custom snakebot for that patient and the particular joint the surgery is being performed on," the Centre's chief investigator Jonathan Roberts told ZDNet.

In order to create snakebots that work in the confines of each individual's anatomy, the QUT team generate tens of virtual versions of the snakebot and set evolutionary algorithms to work on them, in a survival-of-the-fittest contest designed to create the best available bot.

First, the patient's knee is scanned by CT or MRI and a model of its internal anatomy is modelled. Alongside the surgeon, the QUT system then delineates which parts of the knee the surgeon will need to reach during the operation, as well as the parts they need to avoid.

With the model knee in place, the QUT system puts one hundred snakebot designs through their paces, testing them individually in a simulation to find out how well they get to right parts of the knee. Afterwards, they're ranked according to their performance. Then the evolutionary algorithm refines the better-performing designs according to the results of the simulation, running the simulation over and over again, and tweaking the winning bots and rejecting those that aren't up to scratch.

"This is copying what's been observed in nature and the process of evolution but you do it inside the computer... we kill off the ones that didn't do very well and we mate the ones that do well. Mating, in this case, means you combine half the characteristics of one and half of the other. You do random mutations on some of them - change a few little bits during the mating."

After 30 generations, the evolutionary process is complete. Once the winner is crowned, it is sent to be 3D printed, with the ultimate aim of being used in surgery. The snakebots are hollow, and the surgeon's tools and cameras can be threaded through the hole in the middle to reach the joint surfaces.

The hardware is evolving, too. Instead of metal sections that fold down like an old-school car aerial, the Snakebot is made of a number of sections of 3D printed plastic connected to each other with nylon wires, and able to bend like a spine.

Future iterations could come with a new camera system that's currently also under construction by the Centre. "You can build a 3D map of the joint when the camera's in there, which can be used by the surgeon or the computer system to help control the robot," says Roberts. The system could also become semi-autonomous, able to guide surgeons away from areas of the joint they need to avoid. "The idea is if a surgeon was moving a tool into a location they've already told the system it shouldn't be in, for example if it was going to damage some cartilage, we're building safety feature so that the surgeons can't accidentally go in the wrong place. There's a protection system around the surgeon."

That's not the only way the bots could help orthopaedic surgeons. The team are also working on an additional robot that holds patient's legs during surgery and moves it around to allow the surgeons to access every part of the joint that they need to, a role traditionally performed by the surgeon and their assistants during the operation.

The snakebots have been designed to attach to current-generation surgical robot systems. The QUT Snakebots currently working with the RAVEN II, a research version of the Da Vinci surgical robot that's one of the most used robotic surgical systems in medical practice.

For now, the QUT snakebots are being tested on anatomical models. The team hopes to go on cadavers before too long and, from there, to commercialisation in a matter of years.

SEE: What is digital health? Everything you need to know about the future of healthcare

While the snakebots have so far been targeted at orthopaedic surgery, those aren't the only operations that the system could be used for: the twists and turns of brain surgery could also be ripe for the snakebot to be deployed, Roberts says.

"Because it's about robots for minimally invasive surgery that can go around corners, that's applicable to many, many things. One very obvious one, which people are starting to talk to us about, is neurosurgery. If you want to get to somewhere in the brain, you don't want to necessarily go in a straight line from where you enter from that - you probably want to avoid things like blood vessels. That's where you really want to be able to go around corners. Making a patient-specific robot for brain surgery makes a lot of sense. That's a very obvious next area to investigate."

Join Discussion for: These robot snakes designed by AI could be...