For the past few months, I've been in the market for a new Windows PC.

Not a two-in-one. Not a tablet. A PC. I wanted a laptop with a permanently attached keyboard and a flat base that also was thin, light, had good battery life and a decent screen. I didn't mind if it ran Windows 7 or Windows 8 and also was indifferent as to whether it had a touch screen. I wasn't looking for bargain-basement pricing; I was willing to pay good money for a good machine.

I discovered a few things during my search. But it all boiled down to this: There's no shortage of Windows PCs and tablets from which to choose. But there's no good way to make the choice.

I live in New York City -- a city with no Microsoft Store beyond a small kiosk in Columbus Circle . (Yes, I know I sound like a broken record.) There are a number of retailers in New York City that sell Windows PCs, including but not limited to Best Buy and Staples. Last year, when Microsoft announced a campaign to work with Best Buy to build "Store within a Store" for Windows-based machines , I was hopeful that I'd finally have a useful way to evaluate Windows PCs and tablets, side-by-side. 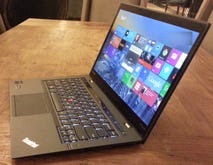 The ThinkPad line of laptops has long been the standard for business. The latest model is the best of the lot, by far.

Repeated visits between October 2013 and just this week to two major Best Buys in Manhattan resulted in frustration. Windows 8 PCs were frozen or broken. Often there was no working Internet connection. Spec labels didn't match the devices. Devices were tethered so tightly to tables that it was impossible to lift them to get a sense of their real weight. During one visit, someone had just pulled the tethered PC I wanted to look at a little too far and an alarm began shrieking. I waited for five minutes and decided to leave when no employee arrived to turn it off.

I just wanted a chance to type on a working Ultrabook, to see for myself how quickly (or not) it opened apps and sites, and to check out whether the track pads actually worked any better than they did three years ago when I bought my most recent Windows laptop.

I read lots of PC and tablet reviews written by my colleagues at ZDNet, CNET and other sites/pubs. I am lucky to know lots of PC reviewers who tolerate my many questions and are quick to make recommendations. But when you're ready to plunk down $1,500+ for a device you want to last for a few years, you want to have a chance to at the very least type on it, surf on it and lift it. At least I do...

Many of the benchmarks published by vendors and reviewers aren't the stats that matter to me. I don't care how long a device can play continuously streaming video. I care more about how long my battery will last when I perform my required tasks intermittently. I had assumed Windows 8 and/or touch was terrible in regards to intermittent/standby battery life based on what I've seen on my Surface RT. I wouldn't have known the truth -- that there are Windows 8 and touch PCs that sleep/wake properly -- without having a chance to use one.

I realize my laundry list of features and usage requirements (must allow for long periods of typing, unplugged, well-balanced on a lap) are particular to what I do and how I work. That's another nice thing about having a choice of form factors. Some people find Microsoft's Surface 2 with a dual-position kickstand "lapable" enough. Some find Windows PCs with four hours of battery life to be plenty because they only need to do short bursts of unplugged work. Some don't care if they can run Win32 apps; for others, it's a must.

After months of asking reviewers and those who'd taken the PC plunge what they liked and didn't, I still didn't feel confident enough to pull the trigger. It seemed every time I turned around, new models of the machines I was considering were appearing on the market with little or no fanfare.

There is a happy ending to this rant. Thanks to strings pulled by TWiT's Father Robert Ballecer, a k a @PadreSJ, Acer agreed to loan me an Acer Aspire S7 for a couple weeks. After having a chance to put it through its paces, I bought the high-end Core i7 model with 8 GB of RAM, 256 GB SSD and 2560 X 1440 screen a week-plus ago.

I wanted to buy this from the Microsoft online store, so that I could get it crapware-free (Signature Edition), but it was out of stock. (It seems to be back in stock now, of course.) Happily (and surprisingly), when my machine arrived from Amazon.com, it included a card noting I had gotten a Microsoft Signature edition anyway.

The not-so-happy part of all this: It's still no easier or better to buy a Windows PC in New York City than it was three years ago. For a devices and services company, Microsoft sure makes it tough to try and buy Windows devices.

I'm curious how others out there decide which Windows tablets and PCs to buy, especially if you don't have a Microsoft Store readily accessible. What's your process?