It's long been rumored that Apple was working on its own version of the smartwatch, and now that's been unveiled, what about that other mythical Apple device – the TV?

Rumors that Apple is secretly working on a TV have been circulating for years, with analysts going as far as to say that its launch was " imminent " back on 2012. But now it's 2014 and there's still no TV out there emblazoned with the Apple logo. 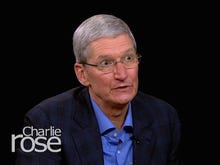 The usually tight-lipped chief executive of Apple opened up to PBS' Charlie Rose in a two-part interview. Here's the first part.

But that doesn't mean that Apple isn't interested in TV.

"TV is one that we continue to have great interest in. I choose my words carefully there. TV is one of those things that, if we’re really honest, it’s stuck back in the seventies," said Apple CEO Tim Cook during an appearance on the Charlie Rose show.

"Think about how much your life has changed, and all the things around you that has changed. And yet TV, when you go in your living room to watch the TV, or wherever it might be, it almost feels like you’re rewinding the clock and you’ve entered a time capsule and you’re going backwards. The interface is terrible. I mean, it's awful!"

Apple is, in essence, already in the TV business with its Apple TV set-top-box, which has more than 20 million users now.

"I don't want to get into what we're doing in the future. We’ve taken stabs with Apple TV, and Apple TV now has over 20 million users, so it has far exceeded the hobby label that we placed on it," said Cook.

"We’ve added more and more content to it this year, so there’s increasingly more things that you can do on there. But this is an area that we continue to look at."

Some points worth throwing into the equation: