Full Bio
Posted in Between the Lines on September 9, 2014 | Topic: Apple

Meet Apple's latest creation: the iPhone 6, with a twist.

Since the launch of the iPad in 2010, the Cupertino, Calif.-based technology giant has been riding on the successes of its iPhone. On Tuesday, the wait was finally over.

Apple's chief executive Tim Cook took to the stage in the company's home town to announce, among other hardware and software nuggets, two brand new smartphones in different sizes.

The devices come in gold, silver, and space gray.

Pre-orders start on September 12 and Apple will begin shipping the devices September 19.

The latest version of its mobile operating system iOS 8 will be released for free on September 17. It is available on the iPhone 4S and later, iPad 2 and iPad mini and later, and the fifth-generation iPod touch.

Here's what Apple is serving up in the iPhone 6, and iPhone 6 Plus:

A brand new design: The new design is rounder, larger, and easier to hold. The iPhone 6 lands in a 6.9mm thick shell, and 7.1 mm for the iPhone 6 Plus. Both devices are thinner and lighter than the iPhone 5.

64-bit A8 chip: The two new smartphones contain the next-generation A8 chip, which has 2 billion transistors, double that of the first-generation A7 chip.

M8 co-processor: This new co-processor works alongside the main chip to continuously measure motion data without draining battery life. The M8 co-processor is designed for fitness and activities, it was announced. It can now figure out elevation, such as with a flight of stairs. It also comes with a new sensor called the Barometer, which measures elevation from air pressure.

Improved 8-megapixel camera: The camera is improved from the iPhone 5s, with a few new additions, like a new and improved sensor. The True Tone flash changes color depending on surrounding lighting, and images should come with greater noise reduction technology. The auto-focus is twice as fast as before, executives said. Panoramic photos now go up to 43 megapixels in size. The iPhone 6 Plus, however, comes with optical image stabilization.

Near-field communications (NFC) for mobile payments: Apple's latest smartphones will come with a mobile payment feature, made possible with a near-range wireless chip that will allow users to pay for low-priced products from their device.

Better battery: At least, proportionally. Apple's Phil Schiller said the new devices will be as good as, if not better than, the iPhone 5s. Expect about 11 hours of video watching and Wi-Fi browsing, and about 14 hours of video and browsing on the iPhone 6 Plus.

Faster networking, LTE: Next-generation speeds are now up to 150 Mpbs, compared to 100 Mbps in previous models. The iPhone 6 and 6 Plus also come with 802.11ac networking for faster home and office speeds.

Included in  the latest version of iOS 8 , which lands with the iPhone 6 and iPhone 6 Plus, we have:

Apple Pay: A new mobile payment system, using the iPhone 6's new NFC chip, will allow users to pay for low-priced products from their device. Integrating with Touch ID and Passbook, users can add a new card from iTunes or by scanning their card with the camera.

HealthKit: Health, a dedicated app, and slated to work with third-party apps and services, it integrates with leading institutions so it can link with doctors and hospitals. It works seamlessly with Apple Watch, the company's new wearable .

Wi-Fi Calling: You can now (carrier supported) make calls over home or work Wi-Fi networks. It is supported on T-Mobile in the US, and EE in the UK for now.

Handoff: If you're working on your Mac and you need to switch between devices, you can "handoff" to your iPhone or iPad, running iOS 8,  so long as you are within a close proximity . Many existing apps, like Safari, Mail, and Messages, will work from the start, as will many third-party apps offering support.

iCloud Drive: iPhones and iPads running the latest iOS 8 software will have its  own dedicated app for browsing through your iCloud , similar to a cloud-based file manager. 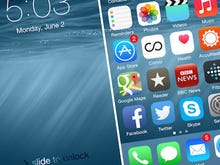 QuickType and third-party keyboards: New predictive typing suggestions for words, allowing users to type out text messages and emails faster. By using context suggestions, different patterns and styles of writing are predicted based on who you are contacting. Additional and  third-party keyboard support  will also come with iOS 8, paving the entrance for major alternatives, such as SwiftKey.

Interactive notifications: Users can now pull down from a notification and reply there and then, without having to leave the app you're in.

Text messages support in iMessage: Traditional SMS messages will now synchronize across iMessage to other devices, including Macs.

Enterprise features: iOS 8 includes a  number of enterprise-focused and manageability features , including Device Enrollment Program, which sets up your device automatically — like apps, mail, contacts, and more. It also includes with per-message S/MIME, VIP message threads that display on the lock screen, increased security, and third-party document providers.