The ultimate in remote working: Controlling the Mars Curiosity Rover, from home

The Curiosity team may operate a rover on Mars, but it didn't let a lockdown come in the way of its daily activities.
Written by Daphne Leprince-Ringuet on April 16, 2020 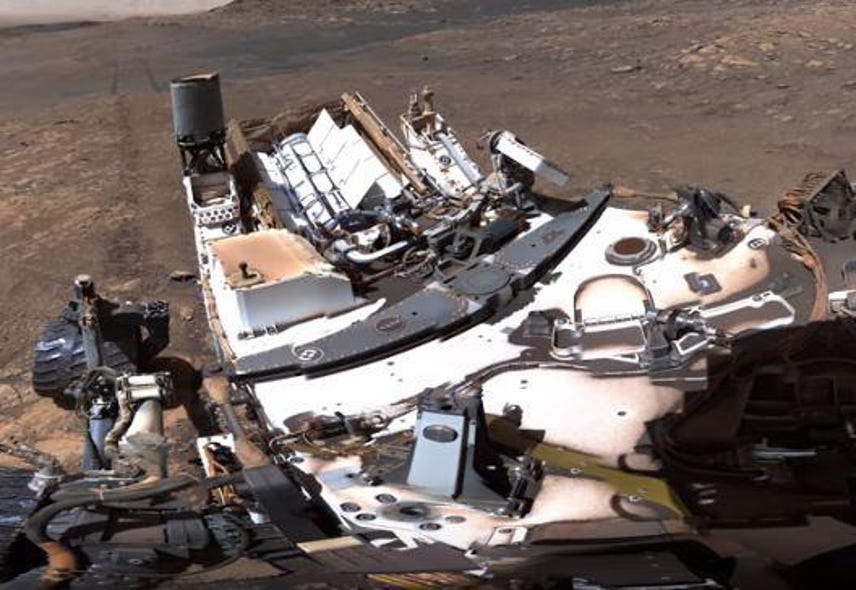 Since 2012, NASA's Curiosity rover has been cruising over Mars, but the team operating the vehicle is still very much grounded on Earth, which means they haven't been exempted from the new social distancing rules in place, even if the project they are working on is 200 million miles away.

As the coronavirus crisis forced offices across the US to shut last month, so the Curiosity team have had to work out how to switch to remote working to keep business running as usual.

The team is based at the Jet Propulsion Laboratory (JPL) in Southern California, one of the first states to record cases of the virus at the end of February. NASA's Mars exploration unit, therefore, began anticipating major disruption to daily operations from the beginning of March, when it became evident that the pandemic was soon to hit home.

The bulk of the Curiosity team's work consists of maintaining and controlling the rover's activities in the Pahrump Hills region of Gale Crater on Mars, and to monitor the vehicle's findings, often by analyzing rocks and sand that are picked up by Curiosity's instruments. Needless to say, the prospect of working from home required an entirely different set of preparations than typical office-based jobs do.

Although Curiosity's project leads were early to brainstorm ways to operate with some employees working remotely, Ashwin Vasavada, Curiosity's project scientist, explained to ZDNet that at this point, no one had a clear idea of how severe things would get.

The team, therefore, considered options where some team members could still work on site, such as those who needed special equipment, as well as options where everyone worked from home. The project leaders also considered a range of responses, ranging from operating as normally as possible, to doing the bare minimum to keep the rover alive.

On Thursday, 12 March, remembered Vasavada, the team held a full rehearsal of remote operations, although still unsure if or when they'd need to actually use the capability. "The following Monday, we held operations on site. By Tuesday, JPL had nearly all employees start working from home," said Vasavada.

The team decided to put a pause on normal operations for three days, while they addressed some of the issues they had encountered during the rehearsal. "Over the next three days, the team worked incredibly hard to iron out the last few details, provide equipment to who needed it, and to have additional rehearsals," added Vasavada.

Similarly to many non-space-related organizations, some of the immediate challenges were technical. Making sure employees had the computers, internet connections and appropriate software were the first priorities for NASA's IT department, but given the nature of Curiosity's work, some of the hurdles proved tougher to tackle.

To study the 3D images of Mars that they receive from the rover, for instance, scientists use special goggles that shift between left- and right-eye view to provide a better understanding of the landscape, which lets them operate the vehicle safely. This type of hardware, however, requires advanced graphic cards and high-performance computers. In other words, it isn't available to borrow off the lab and take home.

Operators resorted to simple red-blue 3D glasses, similar to those distributed in cinemas, to be able to read the images on their own laptops. The makeshift substitute is not as immersive or comfortable as the goggles, but works well enough to plan drives.

On Friday 20 March, three days after the office had closed, the Curiosity team successfully commanded the rover with the full team working remotely. A few days later, after several tests and a full practice run, Curiosity carried out a drilling operation into a sandstone target dubbed "Edinburgh" – all of which was coordinated from the comfort of the team's homes.

The Edinburgh operation was the first time that Curiosity had attempted to drill on Mars since 2018; and the rover encountered no problem in delivering samples of rock powder to its Sample Analysis at Mars (SAM) and Chemistry and Mineralogy (CheMin) instruments.

Despite the importance of the operation, and the experimental conditions that the drilling was carried out in, Vasavada maintained that he was confident that the procedure would go fine, so long as the team had a plan. "Even though we're drilling on Mars, our problems are very earthbound," he said. From dropped connections, to struggles with mute buttons and software issues: the challenges encountered by NASA's team are similar to what many people are dealing with these days, maintained Vasavada.

The biggest disappointment, really, was giving up a tradition of sharing donut holes after every successful drill, continued Curiosity's project scientist. "We had to send little donut emojis around instead," he added.

Finding such substitutes for human communication has been key to enabling business continuity for the Curiosity project. And it's not just about virtually celebrating the outcome of difficult operations. For NASA's Mars unit, which normally works within a mission-based environment, with team members all sitting next to each other, highly interactive communication is necessary to the running of day-to-day activities.

"We had to think a lot about how to divide that communication up into various chat rooms, without losing the cohesion of the full team," said Vasavada.

The current nine-to-five for most members of the Curiosity project is effectively inseparable from meeting with fellow team members. Vasavada explained that on most days, a new set of data from Mars arrives overnight, for a team of scientists to analyze while engineers assess the health of the rover. Another team of scientists, in parallel, compiles a new list of activities for the rover, working hand-in-hand with engineers to make sure that the vehicle has the appropriate time and energy.

SEE: Scale, distribution, and occupying Mars: COVID-19 is a catalyst

Programming each sequence of actions may involve up to 20 people developing and testing commands. On a normal day in JPL, everybody would sit in one room to share screens, images and data, and talk to each other from across the room.

The rover's operations plan is then finalized in a meeting attended by all members of the team, after which engineers work on turning the plan into a set of commands to send to Mars, and scientists go off to meet and discuss recent findings.

With teams now working from home, daily activities happen via several simultaneous video conferences and an active use of messaging apps. Curiosity's science operations team chief Carrie Bridge reported constantly monitoring about 15 chat channels, and checking into four separate video conferences at the same time, to make sure that communication gaps are closed. "You're juggling more than you normally would," she said.

Lags and technical glitches, of course, mean that the team has to make an extra effort to understand each other; and on average, each day's planning takes up to a couple more hours than it normally would. Overall, however, the team reported that Curiosity is still as scientifically productive as usual.

It's worth keeping an eye on the rover's findings, therefore. "Mars isn't standing still for us," said Bridge. "We're still exploring."