The Australian arm of the Japanese car giant says it does not believe any employee or customer data was accessed.
Written by Chris Duckett on Feb. 20, 2019 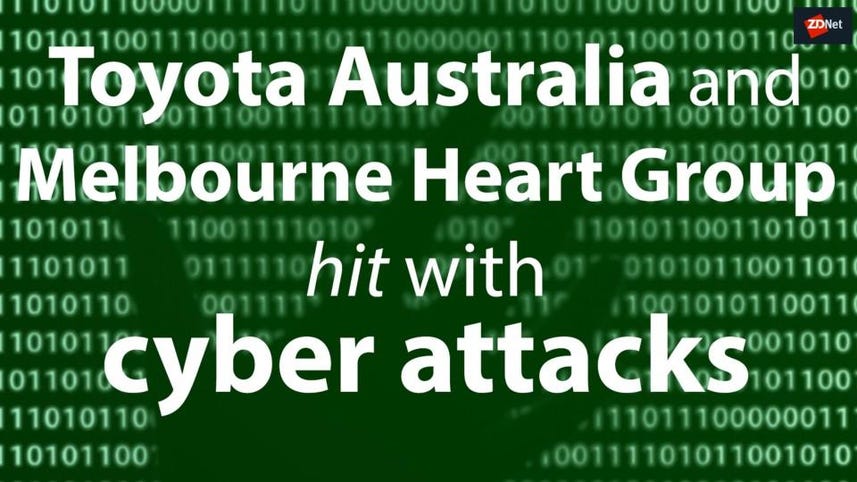 Toyota Australia has said it was hit with what it is calling an "attempted cyber attack".

"At this stage, we believe no private employee or customer data has been accessed," the company said in a short statement on its site.

"The threat is being managed by our IT department, who is working closely with international cyber security experts to get systems up and running again.

"At this stage, we have no further details about the origin of the attack."

Radio station 3AW reported that the attack began yesterday, and callers to the station said staffers were sent home early and the attack could hit the processing of incoming cars.

Also in Melbourne, The Age reported the Melbourne Heart Group, housed within Cabrini Hospital, has been unable to access some patient data for weeks following a ransomware attack.

It is reported that a payment was made, but not all files were decrypted.

In a statement on its website, Cabrini said the Heart Group leases space at the hospital, and systems are separated.

"Data storage and other information systems in specialist suites are owned and managed by the specialists, not by Cabrini. The specialists are not employees of Cabrini," Dr Michael Walsh of Cabrini said.

"No Cabrini data storage or patient-related systems or operations have been impacted or compromised by this incident, and there has been no breach of hospital patient data. Cabrini is providing support to Melbourne Heart Group in relation to this incident."

The cyber incidents come as the Commonwealth is still dealing with an attack that impacted Parliamentary networks, as well as those of Australia's Liberal, National, and Labor parties.

"The Australian government will continue to take a proactive and coordinated approach to protecting Australia's sovereignty, our economy, and our national security," Prime Minister Scott Morrison said earlier this week. "Our political system and our democracy remains strong, vibrant, and is protected.

"The government has chosen to be transparent about these matters. This is in itself an expression of faith by our government in our democratic system and our determination to defend it."

Labor leader Bill Shorten pointed out that political parties are typically small organisations with few full-time staff members that have "large amounts of information" on voters and communities.

Also: Australia has a challenge of scaling defence capabilities for large cyber attacks

"These institutions can be a soft target, and our national approach to cybersecurity needs to pay more attention to non-government organisations," Shorten said.

When a password reset was initiated by the Department of Parliamentary Services, it said there was no evidence to suggest data has been taken or accessed.

Recently, the Australian Signals Directorate (ASD) said that over the course of the last three financial years, the federal government's networks have been the subject of cyber incidents 1,097 times.