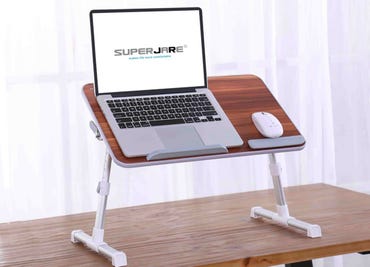 The other day I wrote about cheap ways to level-up your desk. One of them merits further discussion.

Standing desks are all the rage these days, and with good reason: They've been linked to all kinds of health benefits, from weight loss to neck-pain reduction. (Note to management: At least one study indicated an increase in productivity as well.)

Sounds great, right? Just one problem: Buying new desks will put you in the poorhouse. The popular Fully Jarvis Bamboo, for example, starts at $395, though it does offer motorized height adjustment. And the Varidesk Pro Plus 48, which adds stand-up surfaces to existing desks, runs even more: $495.

Thankfully, there are more affordable solutions -- including a particularly affordable one I discovered after writing the aforementioned story.

For a limited time, and while supplies last, an Amazon seller called Superjare offers this portable laptop table for $31.44, shipped free with Prime. It's identical to the Avantree-branded model I mentioned in the previous post , which was already a pretty killer deal at $36.99.

Here's what I like about this thing: First, it's both height- and angle-adjustable, and those mechanisms require a simple button-push to operate. (I've seen some non-motorized standing desks that are a huge pain to raise or lower.)

Second, the surface has an attractive, office-friendly cherry veneer. (There's a beige version as well, though it's priced at $39.99.)

Finally, it's portable: You can fold up the legs and move the stand somewhere else -- like, say, the conference room if things have gotten too noisy around your cubicle. Likewise, if you're not comfortable standing all the time, just fold up the stand and go back to sitting for a bit. Unlike a lot of larger products, this is easy to swap on and off your desk.

Is it as comfortable or versatile as something like a Fully or Varidesk desk? I can't say, because I haven't used one.

However, nearly 100 Amazon customers collectively rated the stand 4.5 stars (out of 5), so it's a pretty safe bet you'll like it.

What's your experience with standing desks, either the real deal or a stand like this one? Hit the comments and let the chair-bound know what to expect.