US and China officially sign phase one of trade deal 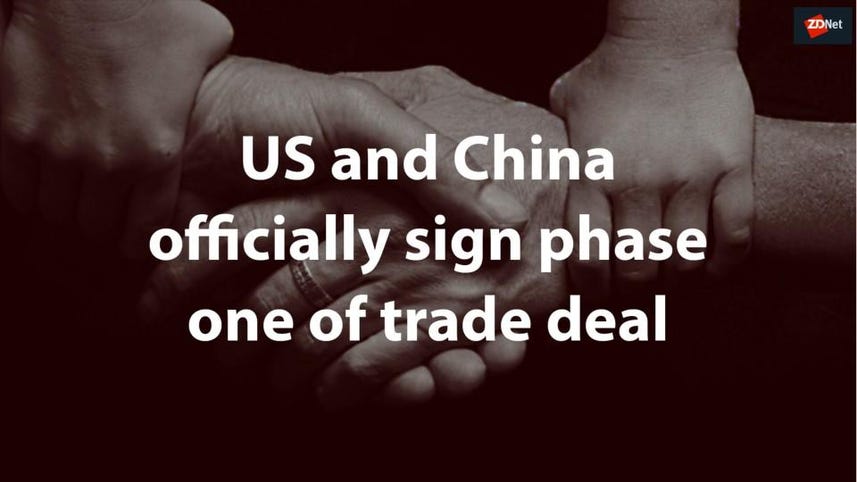 The United States and China have officially signed the first phase of a trade deal, putting an end to some of the tit-for-tat tariffs that have been raised by both countries over the past two and a half years.

Among the tariffs to be affected are the December 15 tariffs against China, which will be completely rolled back as part of the deal.

Products that were set to be hit by the December 15 tariffs, which never came into force, included cell phones, laptop computers, video game consoles, certain toys, computer monitors, and certain items of footwear and clothing. With the rolling back of these tariffs, US consumers will avoid having to pay an extra 10% for such products.

In addition to the easing of certain tariffs, phase one of the trade deal [PDF] will also see greater protection be provided for intellectual property and technology transfers, increased Chinese spending on US goods and services, as well as a more open Chinese market for US companies.

"We must take strong defensive actions to protect America's leadership in technology and innovation against the unprecedented threat posed by China's theft of our intellectual property, the forced transfer of American technology, and its cyber attacks on our computer networks," said United States Trade Representative Robert Lighthizer back in June 2018.

The deal also contains commitments from China to halt the forced transfer of US tech to Chinese companies, which will see it no longer require such transfers when approving any administrative or licensing requirements.

For trade secrets, the agreement has embedded provisions aimed at the "protection for trade secrets and confidential business information and effective enforcement against the misappropriation of such information". This includes China promising to create legislation directed at electronic intrusions and instances where there is a breach of duty to protect confidential information.

The countries also came to an agreed approach for resolving accusations of trade secrets, with the accused party to hold the burden of proof in demonstrating its innocence.

"The parties shall provide that the burden of production of evidence or burden of proof, as appropriate, shifts to the accused party in a civil judicial proceeding for trade secret misappropriation," it says in the trade agreement.

"Under the circumstance that the right holder provides preliminary evidence that measures were taken to keep the claimed trade secret confidential, the burden of proof or burden of production of evidence, as appropriate, shifts to the accused party to show that a trade secret identified by a holder is generally known ... and therefore is not a trade secret."

Meanwhile, China's commitment to purchasing an addition $200 billion worth of US exports includes $77.7 billion of manufactured goods, $52.4 billion of energy goods, around $38 billion of services, and $32 billion of agricultural products.

Among the US tech-related goods that China has committed to buy over the next two years are nuclear reactors, various manufacturing machines, as well as the compounds of rare earth materials like yttrium and scandium, which are often used to make computers.

Phase one of the trade deal has also made the Chinese market more open for US companies in the areas of electronic payments. With the trade agreement, credit card companies like Visa, Mastercard, and American Express will have less red tape to go through as China will now automatically approve their licences for working with domestic financial institutions.

China's stance on whether to allow these companies to operate in China was already becoming more lax, as it gave permission late last year for WeChat and Alipay's payment platforms to allow foreigners to link their credit cards.

When Lighthizer declared the deal as being "totally done" in December, he noted that one of the things to watch would be China's willingness to adhere to the stipulations of the trade deal.

The trade agreement notes that if a dispute arises, it will be settled without a third party, with the two nations to resolve the dispute on their own. This will be done through filing complaints to the newly stood up Bilateral Evaluation and Dispute Resolution Office, which will be responsible for resolving the complaint.

If the Bilateral Evaluation and Dispute Resolution Office, headed by the US Trade Representative and the designated Vice Premier of the People's Republic of China, cannot resolve the complaint, the complaining country will have the right to issue a response for damages or losses.

If the other country believes the response was taken in good faith, it cannot adopt a counter-response. If they do hit back however, either country can provide written notice and withdraw from the trade deal, which would return both countries to a trade war situation.

For the next phase of the trade deal, US Treasury Secretary Steven Mnuchin told CNBC on Wednesday that cybersecurity issues would be a key focus.