New Beijing "3-5-2" policy to give local tech scene a boost to the detriment of foreign companies.
Written by Catalin Cimpanu on Dec. 8, 2019 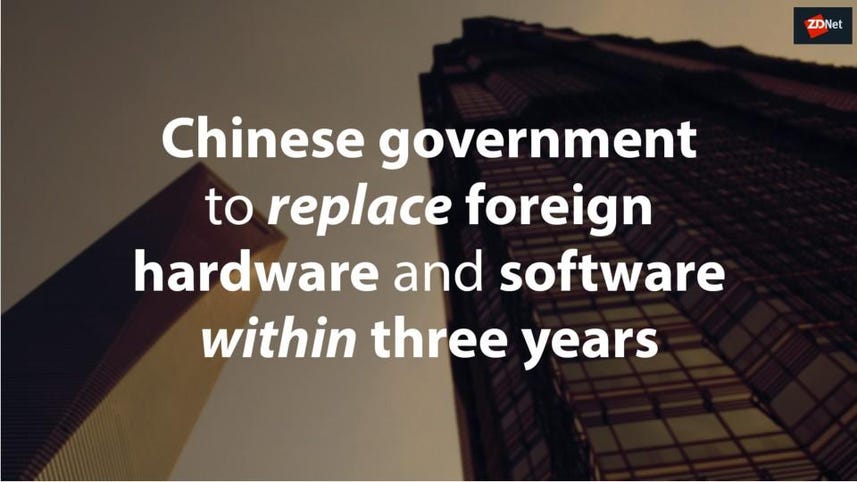 Beijing officials have ordered all government offices and public institutions to replace foreign hardware and software with Chinese alternatives within the next three years.

The mass replacement process was detailed in a government directive issued to public institutions earlier this spring.

The directive is internally known as "3-5-2" based on the percentage targets the Chinese Communist Party imposed on government organizations.

In 2020, the first year when the directive enters into effect, government organizations are supposed to replace 30% of their foreign hardware and software in their respective inventories.

The directive remained secret until the past week when its existence leaked to the Financial Times. The news agency said it confirmed the new directive with employees of a private cyber-security firm, who were also aware of the new policy after interacting with their respective government clients.

The new 3-5-2 policy is expected to severely impact companies like HP, Dell, and Microsoft, known suppliers for the Chinese government.

The directive doesn't apply to privately-owned Chinese companies, which are likely to continue using foreign hardware equipment and software, due to the high cost of replacing private inventories,the FT said.

The new directive appears to have been issued around the same time the Chinese government also ordered its military to create a custom operating system to replace Windows amid fears of US hacking and backdoors in military networks.

The source and reason for the new policy are, without a doubt, China's current trade war with the US, as well as the Trump administration's efforts into getting Huawei banned from 5G infrastructure projects across the world.

Broadband
Samsung Galaxy Z Flip 4 vs Motorola Razr 2022: Preorder the Flip or wait for the Razr?