The US government will soon begin enforcing a ban on travelers bringing electronics in carry-on luggage on some flights traveling to the US.

News of the ban landed Monday when Royal Jordanian Airlines said in a since-deleted tweet that it received a directive from "concerned US departments" that passengers would not be permitted to bring any electronic items into the plane's cabin, except cellphones and medical devices. 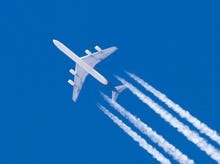 Cameras, tablets and ebooks, laptops, and other electronics will have to be packed into checked luggage, said an emailed confidential Homeland Security edict to airlines.

The ban is expected to go into effect on Tuesday, and affect flights from several countries in the Middle East and Africa.

A spokesperson for Homeland Security would not comment on the potential security precautions, but said the department would "provide an update when appropriate."

But it's not known which countries or airlines the directive will apply to, or how the ban will be enforced. The Guardian has reported, however, that Saudi Arabia's Saudia Airlines will also be named as an affected airline. Other airlines may also have to comply with the new regulations.

Airlines are expected to comply with the new regulations by the end of Friday.

According to an Associated Press report, Homeland Security Secretary John Kelly talked to lawmakers over the phone on the weekend to brief on a security issue, thought to have in part prompted the incoming ban.

The ban is said to have been considered for "several weeks," according to the report, citing a government source.

It's not known how long the directive will be in effect for, but CNN reports that it would be for a "limited duration." The directive is to "ensure enhanced security measures at select airports for a limited duration," said the news outlet.

It's not known if Homeland Security is responding to a specific threat, or if the measures are part of a wider effort to bolster aviation security.

Join Discussion for: US government to ban most electronics from...