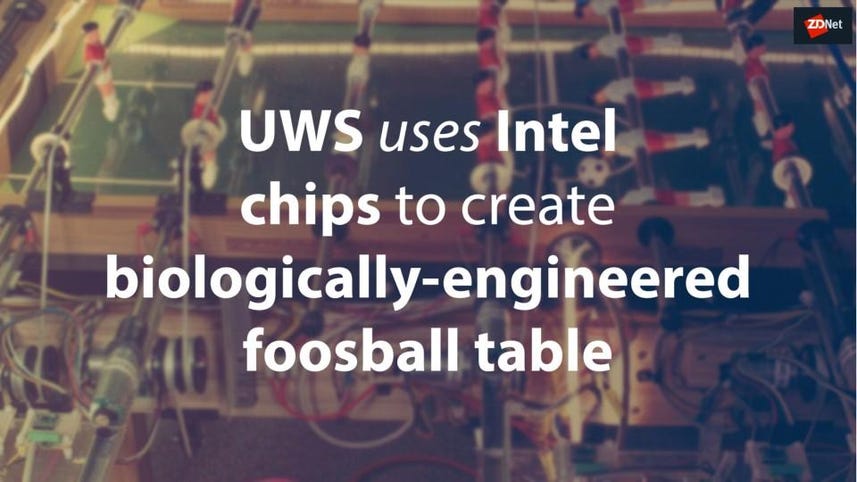 Self-driving cars, robotics, and satellite tracking are all existing technologies, but there are a group of International Centre for Neuromorphic Systems (ICNS) researchers at the University of Western Sydney (UWS) who believe these can be further advanced by applying neuromorphic engineering.

And making it a reality is exactly what they're doing.

"We are doing that by trying to understand how the brain computes information all the way to bashing and building devices such as cameras, for example, to work more like biology, instead of like a normal camera."

Read also: Why companies plan to double AI projects in the next year (TechRepublic)

One way they have done this is by constructing a foosball table, powered by neuromorphic event-based cameras and Intel's neuromorphic Loihi chips, which was recently showcased at the three-week Neuromorphic Cognition Engineering Workshop in Colorado.

"We thought a foosball table is something that presents pretty interesting problems. You have to track the ball really quickly and you've got to move the players around, so it's a really interesting way to show off how well the system works," Cohen said.

"The first step is can you get it defend really well, and can you attack. There's high-level strategy required to pass the ball to that person; and as you go up the more you gain, which is kind of like how humans play.

"If my robot plays better than your robot then it's a better playing foosball robot. If your robot is better at ball thrashing than mine but it's slow, I still win."

When Cohen and his team of 20 are not building a robotic foosball table, they're using neuromorphic cameras and integrating it into telescopes to track satellites.

"[The cameras] work almost like sensors in our eyes rather than conventional cameras. You don't get pictures out of them. You just get changes and it's more in the way biology sees the world.

"If you think about what a camera does, it takes photos … but when you want to catch a ball, for instance, you're certainly not taking high resolution images of the world to figure out how to catch it. You're taking something far more efficient, so we're trying to design cameras that work more like that."

Eventually, Cohen believes neuromorphic systems can be applied to any task that requires neuromorphic cameras, it's just a matter of coming up with different applications and algorithms to match it.

"What we're looking for are ideas and applications to tie it altogether. Space is one, a foosball table is another. But this would be really good for monitoring shoplifting in supermarkets, for example, or fall detection in the elderly," he said.

Business & Management
Get a refurbished 11.6-inch HP Chromebook with 4GB RAM for just $74