Paying for transport like shopping at Amazon Go and the 'death' of the timetable as 'mobility-as-a-service' becomes the new way to travel in Sydney.
Written by Asha Barbaschow, Journalist on July 10, 2019 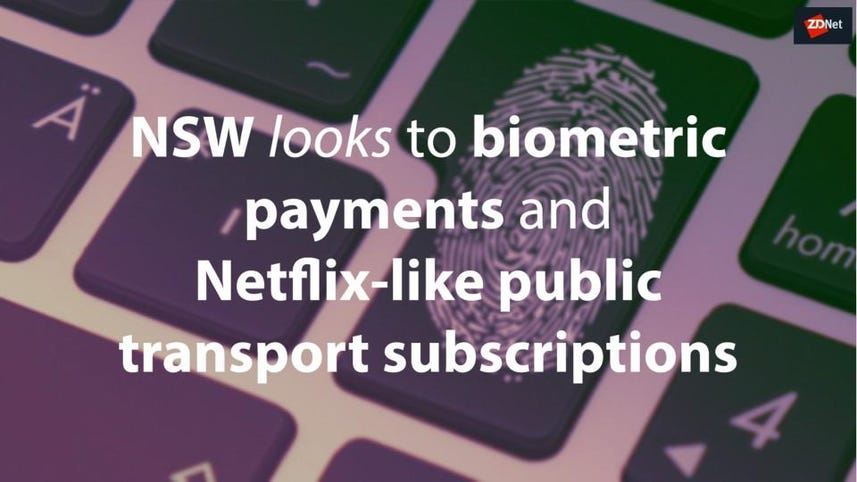 New South Wales Minister for Transport and Infrastructure Andrew Constance has outlined his vision for the future of transport in the state that is home to over 22% of Australia's population, looking to rely heavily on data, biometrics, and real-time access.

Addressing the Sydney Institute, Constance said transport in 2019 is much more than just a train, bus, or car; it's about mobility and "mobility-as-a-service and the incredible way technology is driving pretty much everything we do".

Constance spoke about a trove of initiatives the state government and Transport for NSW has been undertaking, with one seeing the private sector make use of transport data.

Transport for NSW unlocked its data to the world three years ago. It allows anyone access, which Constance said means developers, entrepreneurs, and data analysts can create innovative solutions.

Pointing to an example that shows every public transport service in real-time -- anytrip.com.au -- Constance said such initiatives are about developing better public services and "allowing the best minds in the world to help shape the future of transport in NSW".

Currently, TfNSW has data use contracts with Google, Amazon Web Services, the Commonwealth Bank of Australia, Mastercard, Optus, Austrade, data analytics software firm Vizalytics, and San Francisco-based City Innovate, which describes its business model as improving efficiency and accountability in government and services for the residents they serve.

With Amazon, Constance said the state government is also using the company's machine learning technology across the entire network to predict what the transport day is going to look like. He said this helps TfNSW plan for the unexpected and cope when it is under pressure.

"We fed this technology a years'-worth of weather, Opal, and special event data and it currently has a 90% accuracy rating, and will get better over time as we keep feeding the data in," he said.

"It's technology and innovation like this which gives transport planners the ability to optimise the network and be more responsive to what is actually happening in our community.

"Technology is there, we're tapping into it to make every day life easier for our customers."

With commuters using public transport able to pay with debit and credit cards -- including smartphones and any smart devices that have NFC payment capability -- in lieu of using an Opal card, across many of Sydney's services, Constance said an expansion is on its way.

"Customers have already embraced using their credit cards and their electronic device to tap on and off trains, ferries, and lightrail, and we're about to expand the technology onto buses," he said.

"It's all about making the journey easier and faster for customers and I'm sure we'll see new forms, frictionless transport payments, not too far off."

These new forms, Constance said, would give commuters an Amazon Go-like experience.

"In essence, you sign up for a nominal fee each week or month and all the different pricing for public or private providers will be built into this, whether it be an Uber or rideshare car, bicycle, or a metro train," he explained.

"I don't think it's unrealistic to see this same kind of service being introduced in Sydney in the near future -- seamless, customer-focused Opal transport."

With NSW embarking on driverless vehicle trials throughout the state, and bringing digital driver's licences to smartphones, Constance said he expects there to be an abundance of "connected things" that should be capable of communicating with one another.

See also: Air Taxis will play a big role in smart cities in the future (TechRepublic)

He also said technology will be able to determine, in many ways, the health and well-being and satisfaction of the person in the vehicle.

"Digital identity verifications will eventually be integrated with biometric recognition, the ability to read someone's face, retina, breath, voice to enable the next level of authorisation and access -- it really does boggle the mind in a true contactless payment way. Entry into buildings, onto planes, at banks, hotels all changes -- transport's at the heart."

He said it's just the start of data being captured and deep learning becoming commonplace, and expects that with greater speeds and bandwidth available, Sydney will see real-time reliable transport networks and the "death" of the timetable.

Touching on Uber Air -- touted by Uber as an "urban aviation ride-sharing product" to ease traffic congestion on the ground -- Constance was hoping the Silicon Valley startup would bring its trial to Sydney.

"UberAir ... I wish the world with that," he added. "These might resolve congestion issues rather than create a new kind of congestion and need for regulation."

"As legislation makers we need to be more agile and stay ahead of innovative tends and get out of the way to allow business to take the lead as long as it's done safely," he added.