With many holding out on buying Vista until the first Service Pack it's really important to Microsoft to get it right with this release. I can't wait for the final buid so I've taken the gamble of installing the Service Pack 1 RC1 update although it is about 3 months from being finished.
Written by David Long David on Jan. 15, 2008

With many holding out on buying Vista until the first Service Pack it's really important to Microsoft to get it right with this release. I can't wait for the final buid so I've taken the gamble of installing the Service Pack 1 RC1 update although it is about 3 months from being finished. Flying in the face of the forum posts about BSOD when browsing the web since installing SP1 and other complaints I ventured out and installed it on my shiny new Dell XPS m1530.

The Install. Downloading the "Windows update experience" file for SP1 was quick enough - only a few KB. It contained a registry tweak and instructions in 2 Microsoft Propriety formats - Word doc and XPS (viewable using IE7).

After the registry tweak running windows update reveals all the hotfixes and updates required before you can install SP1. Depending on how up to date you keep your system this maybe 1 install or several. After the installs and inevitable restarts you can download the SP1 installer. This also requires a restart and then a 10-15min wait while it finishes setting up. After this you will be able to use windows update to download SP1. The file size quoted is between 67 and 640mb I guess this depends on the version of vista and your hardware. In my case it was an 80.1mb download (Windows Vista Home Premium 32-bit). This took quite long not sure if this was due to the internet connection I was using or the volume of people downloading the update.

Once downloaded and I agreed to the terms SP1 installed itself. And then restarted to configure updates in 3 stages. Stage 1 and 2 complete before a restart for stage 3. During this time you cannot use your computer and are warned against turning it off. This took my system about 20-30mins to complete. 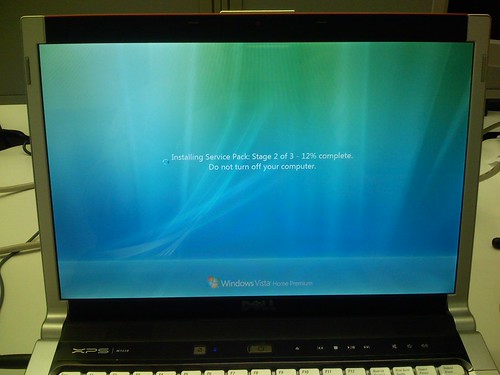 Needless to say I don't recommend starting this process on battery power of if pressed for time. You'll need a good couple of hours and a constant power supply and internet connection.

Overall the install went smoothly and exactly as described in the instructions - with one exception. Somehow Windows Live Onecare didn't start right away and so I was warned about my lack of firewall but after a few minutes Onecare came back to life.

What's new? This update rather than adding new features is designed to address performance issues rather than anything else. Vista has been slammed by business users and gamers alike for bringing their systems to their knees or at least noticeably reducing speed with some apps and games compared to XP.

I was not expecting incredible performance leaps with SP1 - or even to match XP with SP2. What I was hoping for was improved file transfer speed, a slight increase in graphical performance and faster wifi/network connections. Having used Vista since release day and using this particular laptop for the last couple of weeks fairly intensively I've a fairly good idea of what sort of speed various tasks take so couldn't wait to see if SP1 made any difference.

I also wanted to see if stability was improved. I rarely saw vista crash completely but it wasn't uncommon for a particular app to lock up and have to be closed down. Again I've never had problems with Vista uptime either but will test if this is an issue under normal use after SP1.

Most of the complaints I've read about on the SP1 forums are from users that were having issues with Vista before SP1 anyway so as my Vista was running flawlessly prior to the update I am expecting nothing less.

One thing you will notice is that it now says Windows Vista "Evaluation copy" Build 6001 in the bottom right hadn corner of the screen. This is not to say your version of windows is not genuine but the SP1 is not final so you have the evaluation stamp until you uninstall it.

Test 1: File Transfer speed I had grumbled at the slow speed in which my laptop would transfer files from one system to another - typically between 1 and 6mb/s even with a cabled connection via my gigaport. There had even been reported problems transfering large files from one folder to another taking a unusually long amount of time.

I didn't do a test case to compare an exact match to, but I do have a good idea of how long it usually took. In comparison SP1 did make a difference. Previously there was a delay of several seconds before a transfer would begin while windows calculated transfer time and speed etc. Now transfer begins immediately. Transfering to USB stick was about 5mb/s which was about the same as before - this is likely due to the limitations of the memory stick. Transfering from folder to folder on the same hard drive showed significant improvement - Transfers again started immediately and were between 22 and 32mb/s compared to 10-15mb/s previously. Obviously on different hard drives the speed will vary greatly (tested on 250gb 5400rpm SATA). Emptying the recyle bin was most dramatically effected. At times it would take a while to delete a large amount from there. Now the transfer/deleting was instant. Several gigabytes disappeared in seconds with no pausing (I managed to just about see 430mb/s) in the transfer window before it closed). Transfering from a sever on the network to the laptop was 11-12mb/s this was about the same probably due to the speed of the network but again the transfer initiated faster. Final test was transfer from one computer to another via ethernet cable.

File Transfer Improvement: Significant as long as it was Vista that was the bottle neck and not the device/network you were transferring over.

Test 2: Networking/connectivity I found it incredibly annoying at how long it took to connect to wifi once I started up - especially if coming back from standby. Nothing I could do would would speed it up. Searching for networks and then manually picking and connecting rarely worked out any faster than waiting for the connection to be found by itself. Also my office network would never be identified. It would say identifying indefinitely - although it would work fine for network and web access I couldn't change it from a public network to work network because the network was unknown - since installing SP1 it now correctly identifies the network. Wifi also connects much faster - within seconds of me turning on the wifi switch I was connected and ready to browse the web.

Test 3: 3DMark06 Although mainly for testing 3D Gaming graphics the 3DMark also tests CPU and general system performance under extreme conditions. Prior to SP1 I scored 4278, 4180 and 4187.

Firstly I was pleased to see it ran without hiccup - some had reported lockups when playing games or using 3D Apps - I guess this was due support for the graphics card or driver they were using not being what it should be. As my system had a mid-range Nvidia graphics card I would expect that support for this would be good. 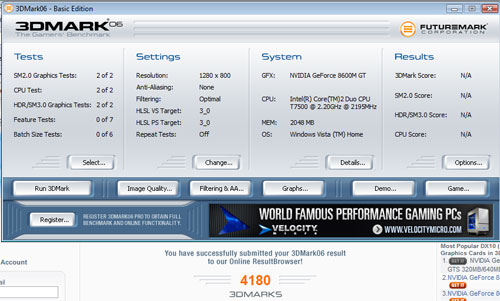 3D Graphic/gaming Improvement: No noteable difference in 3DMark results so Windows XP is still the fastet platform for playing the latest games.

Overall It felt like there were other performance tweaks to as menu responses and switching windows etc. all seemed zippier. Where formerly there was a few seconds delay between you clicking or performing a keyboard command and it taking place it now seemed instant. This is especially noticeable when opening folders containing many photos. Before it took a while for all the thumbnails to be generated - now it seems almost instant - even on an external device like a camera/iPhone. All my hardware still worked as before or better - even obscure devices like the finger print reader and blu-ray drive seemed to respond quicker due to the OS not being as sluggish. Don't get me wrong my system ran Vista well before but there is a noticeable improvement to the overall responsiveness and speed of my laptop now.

After a restart I did get a Runtime error with my Blu-Ray/DVD/CD burning software. Also the firewall issue pops up until Onecare eventually starts. Restarting again and these issues cleared - Onecare started first and there were no runtime errors. I guess it takes a few restarts before everything settles down.

IMO if you are having problems with Vista SP1 may not be the quick fix to resolving them. If you are running Vista ok but want to squeeze more performance out of it then this service pack may be what you are looking for. As to improving stability I will report back after more testing but as I had no significant stability issues before I am not expecting to notice any difference. There are a few niggles with starting up windows initially as mentioned but they cleared themselves up and were not a major concern.