Telco uses a combination of its own fibre and NBN business satellite to serve much of the Australian Bureau of Meteorology footprint.
Written by Chris Duckett, APAC Editor on Feb. 17, 2020 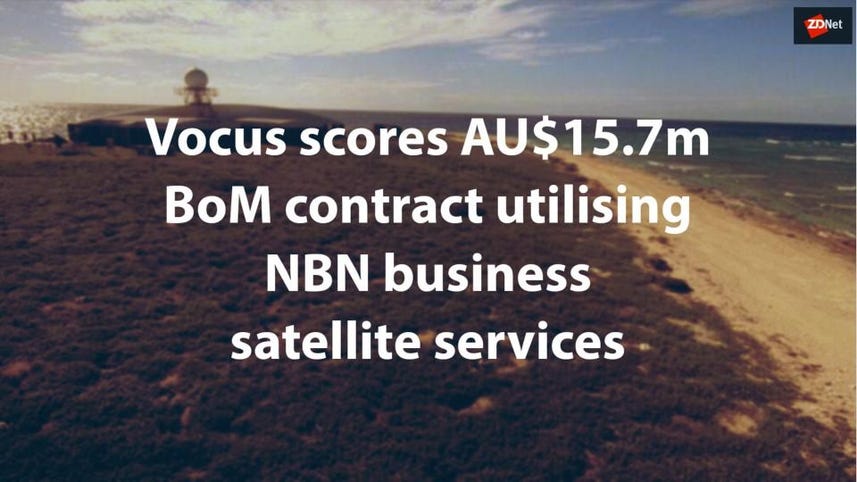 Vocus announced on Monday that it had picked up a four-year AU$15.7 million contract to provide the Australian Bureau of Meteorology (BoM) with network connectivity from its own fibre footprint and NBN's business satellite services.

The telco said the new contract contained all of its existing connectivity and picks up "the majority" of the Bureau's remaining sites. It has also "effectively" doubled the size of the business done with the agency, the company said.

"Typically, we provide fibre and network solutions to customers entirely on our own fibre network, which has been purpose built for business," Vocus chief executive of enterprise and government Andrew Wildblood said.

"For site requirements in areas beyond the reach of our network, we're able to use our expertise as a fibre specialist to provide solutions on the best fibre available -- from NBN, Telstra, and a range of other providers."

NBN detailed in November how it tested its business satellite service at the BoM site on Willis Island -- 450 kilometres off the Cairns coast.

Vocus also announced on Tuesday that it scored a contract with Northern Minerals to supply NBN satellite connectivity to its 55-person plant in northern Western Australia, with the nearest town being 160 kilometres away.

Vocus has had a torrid relationship with NBN. Last month, it called for NBN to be structurally separated if the wholesaler's direct sales team was not binned. NBN later that week chose to use the bin, but said it would continue to "educate and stimulate demand" for NBN services.

During the same week, NBN said it would open consultation on how it would use dark fibre for enterprise connections.

In February 2019, Vocus said the variable nature of the CVC pricing model used by NBN was incompatible with the fixed rates paid by consumers, and the economics does not stack up.

"[There is] no profit margin after costs to migrate, acquire, and serve, together with backhaul and other admin and operational costs," the company said at the time.

The company said NBN pricing was "simply too high", and it was cashflow negative after providing modems and backhaul.

Also announced on Tuesday was MNF Enterprise inking a contract with AARNet to provide IP voice and unified communications to replace its ISDN and copper lines.