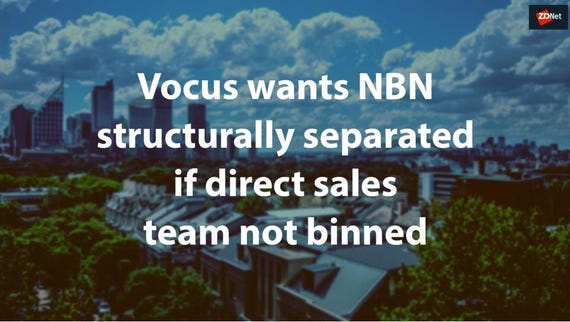 Vocus has continued its fight to get the National Broadband Network (NBN) to stick to what it was created for: Being a broadband wholesaler, and avoid entering into contracts with end-users.

Writing in a submission to the inquiry into the business case for the NBN and the experiences of small businesses by the Joint Standing Committee on the NBN, Vocus said that NBN should have its direct sales unit shut down to prevent it from discriminating between its wholesale customers.

"In the absence of a complete shut-down of NBN's direct sales team, at a minimum NBN's Enterprise business should be subject to separation requirements with equivalent regulatory oversight to Telstra's Structural Separation Undertaking," Vocus said.

"This should require NBN's wholesale staff to work separately from its direct sales staff; and should include legally enforceable 'Protected Information' requirements."

Vocus said NBN is entering into contracts with end-users to use only NBN fibre and then having to find retailers that supply the service.

"This approach leads to an absurd outcome where NBN overbuilds competitive fibre to deliver a 100% NBN solution -- and an RSP may even find itself contractually required to use NBN fibre even at locations where they have their own fibre installed," the telco wrote.

See also: The ACCC is going to need a standard speed measurement for one ADSL2+

The telco pointed to NBN's formal warning in October from the Australian Competition and Consumer Commission for providing Macquarie Telecom with different commercial terms compared to other RSPs when it upgraded NBN infrastructure for business-grade services.

The warning stated that it agreed to upgrade Macquarie Telecom's NBN infrastructure for Enterprise Ethernet at no additional cost and reduced the amount it would have to pay, but it did not offer the same terms and conditions to other RSPs for their respective Enterprise Ethernet build-outs.

In its submission, Vocus called on the government to issue NBN with a new statement of expectations once the build phase of the network finishes in June, stating NBN should not "overbuild competitive fibre" nor engage directly with end-users.

A similar view was expressed in an earlier submission from Optus, which called for "clearer guidance" for NBN, and for the government-owned wholesaler to not overbuild existing enterprise networks.

"Such advice would bring the approach of NBN Co back to its original purpose in the enterprise market – to support competition and allow all service providers to compete for national accounts," Optus said.

Optus said NBN's network provides an avenue for other telcos to challenge Telstra's dominance of the enterprise market, with the incumbent holding 74% of the market and having a much larger fibre footprint.

When offering services to nation-wide enterprises, Optus said it would need to purchase wholesale services from Telstra, and since that area is not "effectively regulated", it is difficult to compete with Telstra on account that "require a large input of Telstra Wholesale services".

Optus added it has seen examples where NBN has "actively discouraged the use of competitive infrastructure", including in cases where a mixture of NBN and existing enterprise fibre would have been cheaper.

"For example, following an agreement signed directly with NBN Co, we understand one enterprise customer mandated 100% NBN FttP solution for all its national sites. However, Optus could have utilised its own fibre network for around a third of those sites with the remaining sites utilising NBN FttP lines," it wrote.

The future could be worse for retailers, Optus said, with a future wholesale agreement to allow NBN to use confidential information from retailers for marketing purposes.

Optus recommended that competition would be improved by overbuilding Telstra's network, but not those networks owned by Telstra enterprise competitors, like itself.

For its part, Telstra pointed out in its submission that in a purely financial outlook, taxpayers would not get a return on the AU$49 billion invested into NBN, but once social return was added, it would pay for itself.

"It is therefore important our regulatory and policy settings seek to optimise the broader social and economic return from taxpayers' investment in NBN Co, and not focus solely on improving NBN Co's 3% internal rate of return," Telstra said.

"Indeed, focussing too much on NBN Co's private returns will put at risk the broader social and economic returns that justify taxpayers' investment."

Telstra said NBN relied too much on temporary discounts and rebates, and ended up putting unnecessary risk and uncertainty on retailers.

"To illustrate, the latest 1 January 2020 edition of NBN Co's Discounts, Credits and Rebates list is the 27th version of this document issued by NBN Co since the first issue in November 2017 and currently runs to 167 pages (covering 45 different types of discounts, credits and rebates as set out in Part Band subject to 48 different sets of terms and conditions as set out in Part C)," it said.

Telstra similarly pointed out NBN was dealing directly with enterprise customers, overbuilding existing networks, and there was a lack of transparency into how NBN was ensuring non-discrimination following its formal warning.

If only a certain telco had not dropped plans to create its own mobile networks, nor try to merge with the number three mobile operator.

Canberra flags wholesale benchmarks for NBN and infrastructure providers in 2020

Implementation to be nutted out between Department of Communications and ACMA.

Faults on the National Broadband Network are being logged at a rate of over 1,370 each and every day.