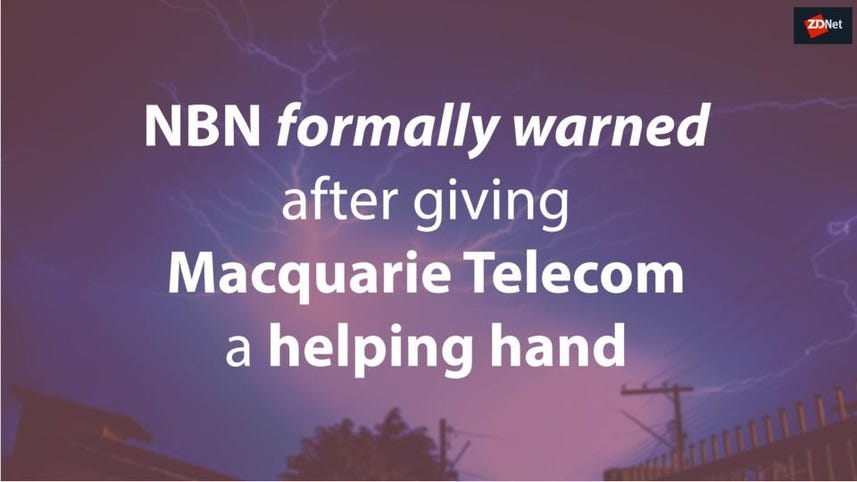 The company responsible for deploying the National Broadband Network (NBN) has been slapped with a formal warning from the Australian Competition and Consumer Commission (ACCC) for discriminating between retail service providers (RSPs) when supplying upgraded NBN infrastructure to business customers.

From an investigation into NBN's activities, the ACCC found that from at least January 2018, the company provided Macquarie Telecom with different commercial terms compared to other RSPs when it upgraded NBN infrastructure for business-grade services.

According to the formal warning [PDF], NBN agreed to upgrade Macquarie Telecom's NBN infrastructure for Enterprise Ethernet at no additional cost and reduced the amount it would have to pay, but it did not offer the same terms and conditions to other RSPs for their respective Enterprise Ethernet build-outs.

"The ACCC has concluded that NBN Co failed to comply with its non-discrimination obligations on a number of fronts," ACCC Chair Rod Sims said.

"These legal obligations were enacted to ensure that NBN Co does not distort competition in the market for retail NBN services, such as by favouring larger RSPs."

NBN, a government-owned entity, is prohibited from discriminating between RSPs when supplying regulated wholesale services. It has since admitted to not having the appropriate processes in place for safeguarding against discriminatory conduct.

The ACCC noted however, that it did not find any evidence of the discriminatory conduct being detrimental to competition or creating specific harm to any RSPs.

"Market feedback suggests that NBN Co's entry into the wholesale enterprise market has increased competition, particularly in areas where Telstra is the only other fixed-line infrastructure provider," Sims said.

In light of the formal warning, the ACCC has accepted a court-enforceable undertaking from NBN to ensure that such discriminatory conduct is not repeated in the future.

"NBN Co welcomes the clarity and certainty provided by the undertaking agreed with the ACCC. The undertaking helps give certainty to both NBN Co and the market about the way we build our network and how Australian businesses can benefit," an NBN spokesperson said in an emailed statement.

"The outcomes that we have agreed with the ACCC provide a transparent platform which confirms NBN Co's crucial role in the business segment. In fact, we're now even better placed to deliver value for the industry and for business customers."

The undertaking, which is legally enforceable between the ACCC and NBN, will see the company commit to offering consistent contract terms to RSPs for the supply of upgraded NBN infrastructure, in addition to giving that same information to its customers at the same time. It will also put in place extensive compliance arrangements, including an annual independent audit of its compliance with its non-discrimination obligations.

"We will be closely monitoring NBN Co's conduct under the enforceable undertaking, and reserve our right to take further action if we are not satisfied," Sims said.

The formal warning arrives shortly after ACCC's draft decision to shift the NBN rebate system, which was introduced last year, from a one-off payment to a daily penalty, in addition to boosting the amount of the rebate.

Under the draft decision, the size of the rebate for missed appointments by the NBN would increase from AU$25 to AU$75, the rebate charged for late connections and fault repairs would move to accrue daily, and a AU$20 rebate would be introduced for users of fixed wireless connected to a congested cell.

Aussie Broadband openly welcomed the ACCC's draft decision last week, but said it would like to see the proposed lift for missed appointments be lifted even further to AU$150.

The formal warning also comes at a time when the NBN has been conducting its wholesale pricing review, with the national broadband wholesaler in September flagging the introduction of three new plans at the top end of its pricing structure, all with lower upload speeds than its existing plans at those tiers.

The final outcome of the pricing review, which the ACCC will be able to regulate, is slated to be announced next month.