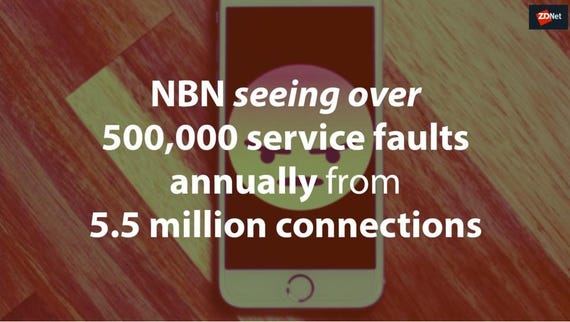 The National Broadband Network (NBN) has revealed the extent to which it receives service faults, telling Senate Estimates via an answer to Questions on Notice that in the 2018-19 fiscal year, it received 501,600 service faults.

At June 30, the NBN had just over 5.5 million active services connected to its network.

NBN said the faults included incidents caused by "external factors" such as weather events, but did not break out the number.

Over the same time period, the number of calls made to NBN's call centre topped 386,000.

NBN added the total did not include expenditure on common assets or transit networks.

Looking at fixed wireless, NBN has made operational 2,198 of the 2,383 towers it expects will be needed for the fixed wireless footprint, with the average monthly download total on fixed wireless sitting at 140GB.

In its full year results handed down in August, NBN said its revenue was up 43% to AU$2.83 billion, and claimed positive adjusted earnings before interest, tax, depreciation and amortisation prior to payments to Telstra and Optus were taken into account.

Responding to Senate Estimates, NBN said it paid AU$6.2 billion to the telcos so far, and expects to hand over another AU$4 billion to bring the total to AU$10.2 billion.