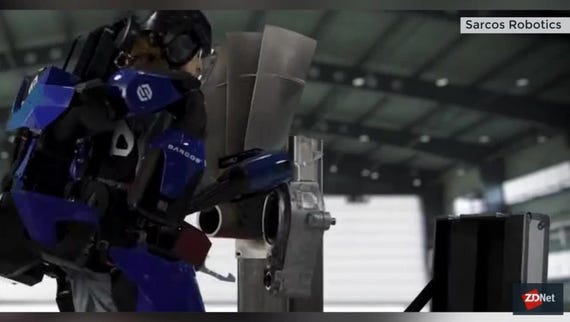 There's are two reasons I've written glowingly about a Utah-based robotics company called Sarcos, which just locked in an additional $40M in Series C funding. The first is the company's pragmatic approach to becoming a key automation supplier in the near-term.

While some vendors are making automation solutions aimed squarely at solving current pain points (collaborative robots, which can be slotted into a light manufacturing line, are a good example), and while others are looking toward a radical future when robots walk among us (take your pick from the spectrum of impressive but impractical personal assistant robots), Sarcos is looking to a near-future in which robots don't replace humans outright but instead augment the strength and endurance of increasingly smaller numbers of workers.

It's a promising strategy, leveraging the best of what humans have to offer -- namely that wonderful piece of hardware called the brain -- while addressing the rising costs of labor and, at least before the pandemic, labor shortfalls in many sectors by squeezing more productivity out of fewer workers.

The second reason I like Sarcos is they make robotic exoskeletons that give mere mortals superhuman strength. That's just cool.

The company's Series C funding will help move the industrial version of that exoskeleton (there's also a defense version) into commercial production. The Guardian XO is billed as the world's first full-body, battery-powered wearable industrial robot designed to increase strength and endurance, and the company has scheduled commercial release in 2021. Wearing the suit, the user will be able to lift up to 200 pounds for extended work sessions, including hoisting tools and materials in industries like aviation, manufacturing, warehousing, logistics, oil & gas, construction, and others.

That may be an optimistic figure, but that date (2030) is right on target. Exoskeletons, which have struggled to catch on in sectors like rehabilitation, where a company called Ekso Bionics is one of the leading players, could become an absolutely disruptive industrial technology over the next decade, and that's where Sarcos is fixing its sights.

"The Sarcos team achieved a significant engineering feat last year by completing the R&D phase of the world's first battery-powered, full-body industrial exoskeleton—the Guardian XO," says Ben Wolff, chairman and CEO of Sarcos Robotics. "This new funding will allow us to achieve our next goal of scaling production and shipping commercial units of the Guardian XO exoskeleton. In addition, we will also advance the development of our 'smart' version of the Guardian XO exoskeleton with our Cybernetic Training for Autonomous Robots artificial intelligence platform, which will enable the robot to augment the operator's precision and skill to complete specific tasks."

Sarcos has begun accepting orders for the Guardian XO exoskeleton and plans to deliver production units in 2021. Expect the ramp-up to be relatively slow at first, but pandemic-enforced social distancing will only help hasten the adoption of human augmentation devices like this one, which allows fewer humans to do more than ever before.