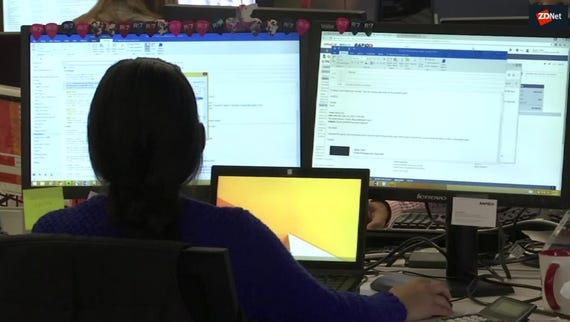 Lured by savings and disaster back up, IT managers warm to cloud
Watch Now

Lured by savings and disaster back up, IT managers warm to cloud

This week, cloud continuity services provider Code42 announced it would be ending its popular CrashPlan for Home backup service.

The Cloud v. Data Center Decision While companies used to have to justify everything they wanted to migrate to the cloud, that scenario has flipped in recent years. Here's how to make the best decisions about cloud computing.

As an alternative, the company will be offering their more expensive CrashPlan for Small Business, or are referring smaller customers to Carbonite which is priced similarly to their consumer plan, at $60 a year for a single system.

Both of these options are actually not bad ones if you are looking for an easy, click-to-migrate sort-of solution for SOHO and SMB.

Otherwise, if your data needs aren't huge, look at consumer cloud storage along the lines of OneDrive or Google Drive.

But the lesson I think most home users and small businesses (and enterprise) should take away from this is: If you have significant storage needs in the cloud, you need to Own the Blob.

Blobs? I'm talking about blob storage, which is the storage container type that cloud services providers extend to their subscription owners as large files that are made available in a file system-like fashion.

In hyper scaler-speak, that's S3 for Amazon and Blob Storage for Azure. There are other flavor derivatives depending on the type of storage, in terms of how redundant and how fast, but suffice it to say that both of these public clouds have comparable storage offerings at different levels that are priced in a similar fashion.

Why would you want to use Blob Storage if you could just use a managed service like CrashPlan for Business or Carbonite? Why worry about administering the back end?

Well, companies like CrashPlan and Carbonite -- and numerous others -- either leverage the public clouds themselves and use blob storage for their own product offerings and simply offer an easy-to-use front end, and have their value-added pricing and services on top -- or they mimic the virtual infrastructure / IaaS environments public clouds use.

If that service provider goes out of business, that data stored on the public cloud is now orphaned. It's encrypted, the defunct service provider owns the paper on it, you don't have the keys to it. You ain't gettin' it back.

On Azure, with a CSP subscription, any vendor can become Designated Partner of Record (DPOR) and in turn, administer this storage account on your behalf at any time. Don't like your services provider? Have Microsoft assign a new DPOR. The blob moves to the new one.

Administering your own backups and storage with an EA subscription but don't like your Cloud provider? Want to move to AWS? No problem. You own the Blob.

The only downside to going with a blob-based backup approach is that this isn't a click and play type of thing, although it's gotten much better than it used to be.

If you have Windows and Linux-based systems, I strongly recommend Azure Backup which is part of their OMS offering, and that includes their very excellent Azure Site Recovery product (ASR) as well.

ASR is a failover/replication/workload protection/cloud migration and BCDR product rather than being a backup, however, and is out of scope for this particular use case.

The great thing about Azure Backup is that it can be deployed on a single server, agent-based config so even small businesses can get in on it.

You can also deploy it as a centralized backup server -- using a special, Azure-only version of DPM -- so that it backs up Windows and Linux VMs running on your VMware or Hyper-V hosts, in addition to regular network-connected and local file systems.

There are no licensing costs for the agent or the on-premises backup server, just the Azure consumption costs. Pricing is actually quite competitive for the level of service they are offering -- $10 per system per month, with up to 500GB of storage per system.

If you go over, it's $10 per 500GB increment. This is priced a little differently than regular blob storage on Azure which is calculated per GB depending on the amount consumed over 1TB.

Azure Backup and ASR use a "Recovery Vault" paradigm by which the actual storage blobs are managed by Azure itself --- you don't need to worry about managing individual storage accounts and the service keeps track of indexes and jobs and things like that.

However, with PowerShell scripting tools, you can easily dump the contents of that vault into a directly readable storage account should you decide to move off the service.

Want something a bit more cloud-agnostic? Take a look at GoodSync 10 which is a great tool for doing file-level backups and synchronization from any Windows or Mac computer to a public cloud storage target. That includes Amazon S3, Azure Blob, OneDrive, Google Drive, Dropbox, Box, Backblaze, FTP/SFTP and SMB file shares.

It runs on both Windows and Mac and costs $30 per PC (in addition to your cloud storage consumption costs), although the free version does quite a bit albeit with some limitations.

Once I had my Azure and Amazon S3 blob accounts (which are created through the Web UI for each of those services) it only took me a few minutes to set up jobs with GoodSync on my Windows PC.

Another solution I have used in the past with cloud backups and cloud drive mappings is CloudBerry. Its use case is a little different than GoodSync, but I like its features. Like GoodSync you will want a blob storage account on AWS, Azure or other supported public cloud provider.

Does it take a little bit more work to configure a public cloud blob-based backup rather than use a third-party service or consumer-based cloud storage? Yes. But if you are concerned about data retention and the ability to access that storage long term, it's your best option.

Join Discussion for: Beyond CrashPlan and Carbonite: For cloud...