2017: New iPads on deck, but not a business-worthy device in sight

The PC hybrid is currently the only end-user business platform that is equipped to deal with next-generation cloud computing environments in dynamic mobile computing scenarios.
Written by Jason Perlow, Senior Contributing Writer on March 23, 2017

[This article was originally published in May 2016.]

I love my iPad. I'm as inseparable from it as most middle-aged blue-collar guys are from their La-Z-Boy. It's the first device I look at in the morning, it's the device I look at the most when I break for lunch and have my late afternoon coffee breaks, and it is the last thing I put down at night before I go to sleep.

And I'll probably buy the next generation that comes out. Although, to be honest, I'm on the fence if I want to continue with the extra-large form factor the next time around.

So yeah, I'm an iPad Addict.

But like anybody with an addiction, you still need to be able to function at work. Once you stop being able to do that, you need an intervention.

Also: Why Apple's tablet is a big fat enterprise failure | Amazon could hammer the final nail into the iPad's coffin | Apple's iOS can't handle the Cloud | Apple won't do what's needed to save the iPad

Most of what I do with my iPad can be classified as personal data consumption, such as my off-work email, Facebook, Twitter, and of course streaming video services and games. I also have Office 365 and Skype for Business loaded to do some light work.

For most business users who own iPads, I suspect the use case scenarios are similar. The iPad is primarily an off-hours device that also doubles as a communications and content review tool.

However, when it comes to a line of business device, it ain't all that. Sure, you have some vertical market scenarios in play where iPads and Android tablets are a good fit for specific field uses, but those are the exception rather than the rule.

And yes, I'm aware of the many technology bloggers that use their iPad as their primary content creation device. I'll remind you that they don't work for Fortune 500 companies.

I've written at length as to why this is the iPad's key problem, and why its market growth has effectively tapped out.

When the iPad first came out it was heralded as groundbreaking, even revolutionary, and that it would bring about a "Post-PC" revolution. That our traditional desktop workloads would be replaced with the tablet, running on the ARM architecture. That Wintel would be toast.

The same could be said of Android and Chrome OS. Neither of these two has had this effect in the enterprise.

While Android has been a wildly successful smartphone platform, it hasn't had iPad's reach as a tablet platform, and lacks a decent stable of tablet-optimized apps, consumer or otherwise.

And while it is having some limited success in certain consumer and educational market segments, Chrome OS has not had much of an impact in business computing either.

Think PCs are dead, tablets rule the world? Here's where everything you think is wrong

Yes, it now outsells the Mac in terms of raw volume shipments. That's not saying much.

Google is attempting to remake Chrome OS as a next-generation desktop platform by converging it with Android in the near future. The platform's success as a line-of-business desktop replacement in the future is hardly a sure thing.

However, despite the failure of iPad and Android to disrupt the PC within traditional line of business workloads, the PC was not immune to these platforms encroaching on its territory in the consumer space.

A lot of consumers who would have otherwise upgraded their PCs in the last six years opted for lower-cost tablets (and to a much lesser extent, Chromebooks) instead.

It had a chilling effect on the PC industry, slowing overall growth to levels that had not been seen in twenty years. As a result, both consumer and business PC designs were affected, including the development of Windows itself.

Clearly, in the process of righting itself, mistakes were made by all parties involved, but in the wake of the tablet revolution in the consumer space, important changes occurred.

First and foremost was that the PC was now competing with a much lighter device, where mobility became a key factor in determining overall usability. So traditional clamshell laptop designs got much, much lighter.

Second is the notion of the PC now becoming a hybrid device, which incorporates detachable or invert-able keyboards and integrated touch screens so it can pull double duty as a tablet.

Microsoft's Surface is the first and primary example of this, but it isn't the only one. Lenovo's MiiX and ThinkPad X1 Tablet, Dell's Inspiron and XPS 2-in-1s and HP's Envy are also good examples.

So the iPad's biggest impact on business is that PCs are becoming more tablet-like, not that the iPad itself revolutionized business. It gave the PC industry a much needed kick in the ass. But it also did something else.

A good part of the reason why no disruption occurred in traditional business workloads is that, in the wake of all this iPad disruption in the consumer space, so much of corporate America spent even longer than expected in the "wait and see" phase of their Windows upgrade cycle.

Windows 8 and 8.1 didn't substantially move the needle, but Windows 10 is showing very good signs of adoption -- 400 million active devices, many of them in enterprise settings, and growing.

An unintended, but perhaps related effect for large organizations was the luxury of time to stop and think. By not making any substantive changes to their desktop environments, they freed up the time and resources to look at what was happening in their datacenters.

Many of these organizations are now in the process of modernizing their infrastructure to support private, public, and hybrid cloud workloads.

Which end-user platform is currently best equipped to deal with this type of next-generation, hybridized cloud computing environment? It's the PC hybrid. Or something a lot like it.

The PC -- more specifically, the Windows 10 PC -- is currently the best candidate because it incorporates all the cross platform technology to do this. It can run complex web apps, it can run legacy Win32 apps, and it can run next-generation UWP apps that are designed from the ground up or can be ported from legacy Win32 to run with touch interfaces natively.

It doesn't matter whether the app runs on the PC itself, or in the cloud as a web app on IaaS, PaaS or even full-blown Desktop as a Service (through solutions such as Citrix or RemoteApp). This class of device has the flexibility to do all of this, including integrating with all of the identity management, security, and mobile device management solutions needed.

That's not to say that some future converged Android/Chrome mashup device with a touchscreen and detachable keyboard won't be capable of similar things. Or for that matter, some iPad Pro/Mac mashup with similar design considerations -- although the creation of such a device and accompanying OS platform is anything but assured, given Apple's disdain for those things that could be considered business or enterprise technology.

Still, Google (and Apple) might very well might create such things. But to get to the level of functionality that businesses expect from PCs, which includes all of the manageability and cloud integration, those companies have a lot of work ahead of them.

Will they need to go through the same painful platform convergence exercise that PCs and Windows underwent in the last four years? Talk Back and Let Me Know. 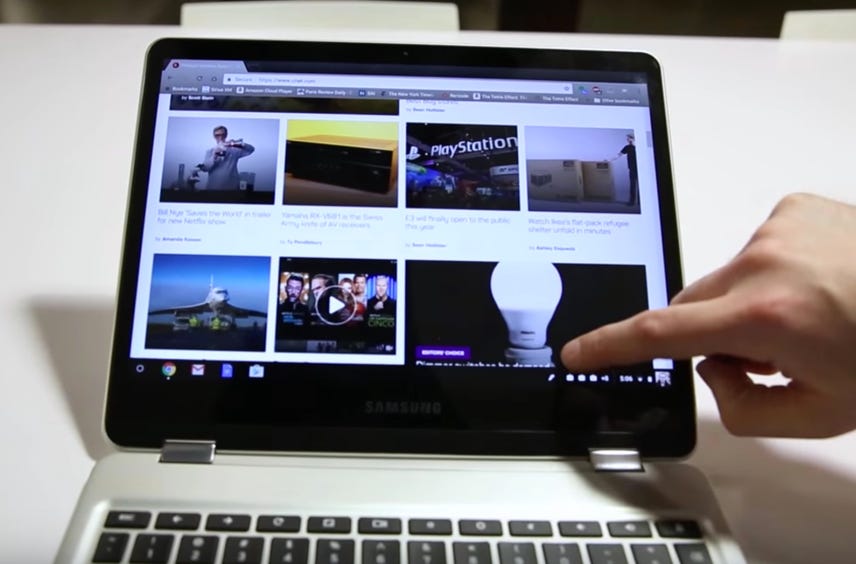