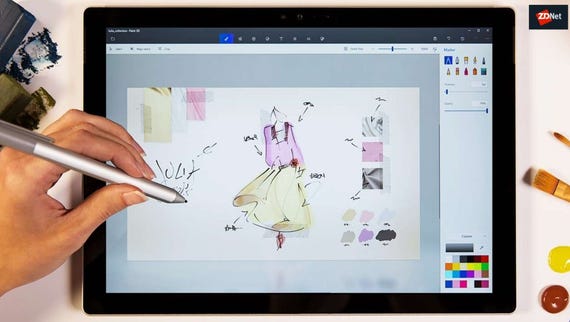 Microsoft has created a new tool for the Windows 10 Paint 3D app called Free View, which brings the app's editing features to the 3D realm.

Paint 3D has a bunch of controls that let you rotate and roll 3D objects to see what they look like from different angles. The 3D objects sit inside a selection box that has controls at the edge for flipping and twisting them.

However, currently in Paint 3D these controls merely act as a 3D viewer as editing can only be done from the standard side view. Paint 3D's editing limitations can be seen in this tutorial video.

The upcoming Free View feature means users can edit from any angle available with the viewer controls, which should make 3D editing more accurate and easier.

A Microsoft video showing Free View in action was posted on Twitter yesterday by Walking Cat, a regular source of unannounced news about Microsoft.

Users switch to Free View mode with the press of a button in Paint 3D. This mode allows the image to be swiveled and flipped via touch or the mouse.

The angle of the box shows the direction the model will move and scale. A flat screen only supports moving objects horizontally or vertically, but can move objects in or out by changing the angle of the object.

Microsoft has also added a new selection highlight feature that lets users see through an object. Besides editing, Free View mode also lets you add new objects with an art brush or via stickers.

Microsoft has not announced the feature, so it's not clear if, when and how Free View will arrive. Paint 3D launched with the Windows 10 Creators Update last April, so Free View could be a good way to mark its first anniversary alongside Windows 10 Redstone 4, which is due out around in March or April.

Microsoft is beginning to add more of the larger, creator-focused features coming to its next Windows 10 release with this week's Build 14971 for Fast Ring Insider testers.

It's time for Microsoft to try to make its case as to why Windows Holographic PCs and devices will make users more productive and creative.