Winterizing your 3D printers with a little help from Harbor Freight

3D printing in a cold environment can be challenging. In this helpful video, David Gewirtz dives into how a few inexpensive materials purchased from Harbor Freight can be used to hack together a warm printer enclosure.
Written by David Gewirtz, Distinguished Lecturer on Jan. 5, 2018 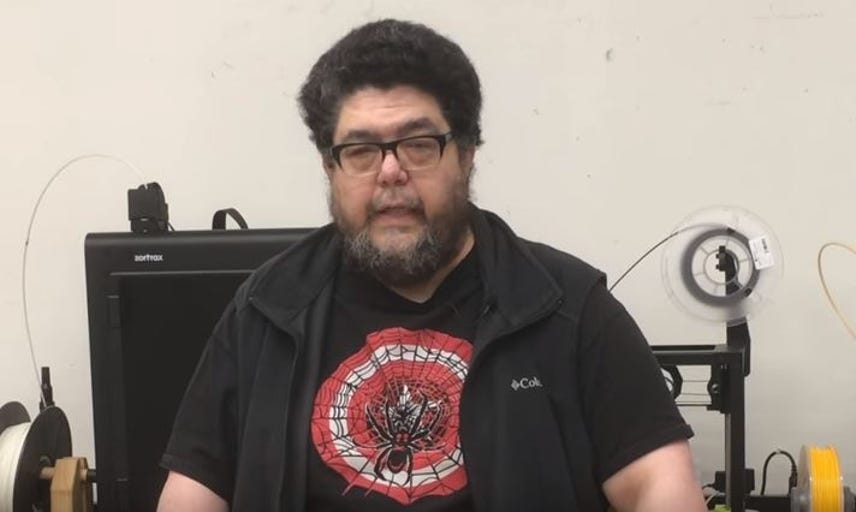 Moving is full of surprises. I knew that Oregon would be colder than Florida. I welcomed the cooler weather, because living through most of the year in 90 degree temperatures was never my thing.

What I didn't expect was the impact the cold would have on the 3D printers. Temperature range is very important when it comes to 3D printing.

When printing with ABS, you need to keep the entire build area hot enough to prevent warping. But what I didn't expect was that the garage would be too cold to successfully print PLA. PLA is a very forgiving material. It usually prints so well and so easily that most people don't spend more than just a little bit of time tuning temperature details -- and usually that's about not making it so hot it melts.

But, as it turns out, PLA does not like printing in cold garages. With an inexpensive space heater, my garage stays about 10 to 15 degrees Fahrenheit above the outside temperature. So, when it gets down to 28 outside, the garage is a chilly 40 or so. As it turns out, PLA doesn't really like printing in temperatures under about 59 degrees (15 degrees Celsius).

This was particularly the case with the CR-10 and CR-10 Mini printers that GearBest was kind enough to send me. Both of these printers have very large build areas, but are completely open. When I attempted to use the printers for large prints, I got layer separation very much like you'd see with a bad ABS print.

In order to use these very cool printers, I had to find a way to keep the prints warm the whole time they're printing. Heating the whole garage isn't an option for a variety of logistical reasons. Instead, I had to create a heated chamber of some kind for the two printers.

If you search YouTube, there are a bunch of great examples of heated chambers built out of wood, foam, or other materials. But I didn't want to create two large structures, especially since that would take a lot of room.

I had already moved the two CR-10s to a wire rack. I had already built some lifting brackets to help secure the printers to the rack, and they fit pretty much perfectly. Since the rack creates a ready-made frame around the two printers, I decided to enclose the rack with some kind of insulating material, thinking that the ambient heat generated by the printer might create enough warmth for the printing process to successfully complete.

My first test was using some old fluffy blankets. I wrapped them around the wire rack, ran a print, and it came out fine. Those blankets were bulky and difficult to manage. Because we just moved across the country, my wife and I immediately thought of moving blankets. Moving blankets are quilted (but not overly fluffy), lightweight, and sturdy. We thought they'd fit the bill perfectly.

I took a quick ride down to the local Harbor Freight Tools. I bought two small blankets (about $5 each) and two larger blankets (about $9 apiece), as well as a few more clamps to augment the nice collection I'd already built up. The clamps are a buck, so we're not talking about a big expense.

I did splurge on two SensorPush wireless sensors. These are about $50 each. They monitor temperature and humidity, and they send that data to your smartphone. They also produce charts, which really appealed to me.

As you can see in the following image, the temperature in the enclosure stayed within desired parameters during the entire duration of the print, then fell once the heated bed and extruder shut down.

I also had to make a set of stand-offs because my first blanket test showed me that, as the printer carriage traveled over the Y-axis, it pushed against the blankets, causing some minor trouble. The stand-offs I made were designed to snap onto the wire shelving racks, and keep the moving blankets away from the printers themselves. I printed 16 of these and installed them onto the rack.

Then all I had to do was wrap the rack in the moving blankets, clamping them to the posts of the rack. My initial blanket test helped me realize that I wanted to be able to check on the status of the print while it was printing, so I needed a camera inside, as well as a light. For the light, I turned to the trusty Pik Light that Mychanic sent me last year. It has a nice magnet, a hook, and a really strong LED. I just hooked it on the upper wire shelf and it lit the entire enclosure for the full duration of the printing process.

For video, I went with an app I had on my phone, Cloud Baby Monitor. I've often used this to keep an eye on our little baby (a Yorkipoo pup), and figured it would probably work well enough for the printer. I wasn't exactly thrilled with the image resolution, but it did the job.

My guess is that the next set of upgrades for this setup will be a better camera system and more integrated lighting, but it all worked out nicely. As the accompanying video shows, the prints that were produced inside the chamber were of very nice quality, with no signs of the kinds of damage I was experiencing earlier.

Temperatures inside the chamber never exceeded the mid-60s, but I'd still recommend you keep a fire extinguisher handy. It never hurts to have one around, no matter what.

Finally, for anyone wanting to print their own stand-offs or CR-10 lifting brackets, here are my Thingiverse pages for those projects: