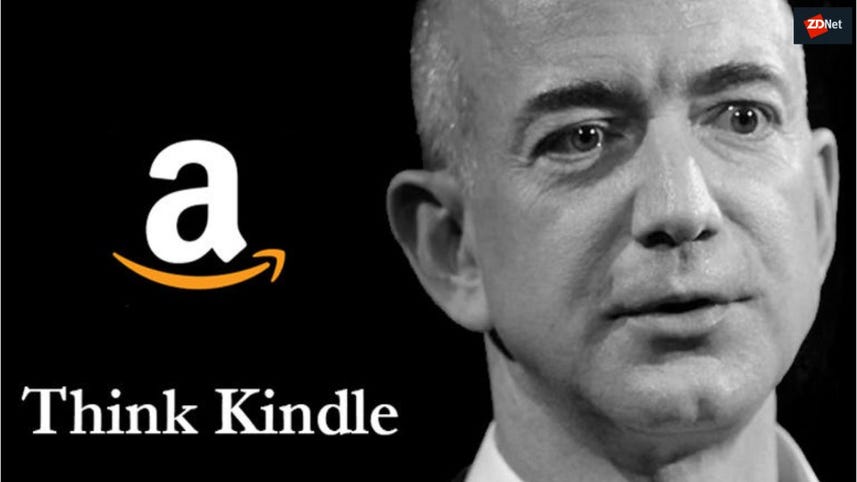 This week, Amazon announced the availability of Kindle Oasis, a new high-end addition to its black and white e-reader lineup.

Early yesterday morning my ZDNet colleague and hardware columnist, Adrian Kingsley-Hughes, was quick to point out just how high-end this is -- it's $290 for the Wi-Fi only model.

It'll cost you $70 additional for 3G, and another $20 if you want to remove the advertisements on the lock screen.

You could buy almost four regular Kindles at $80 apiece for the price of one of these in its basic config. Four.

Who wants to buy one of these? Someone with a lot of money to burn? Maybe. But I think Amazon is a smart company and has done enough research to know they have a market for this thing.

What we can say for sure about Amazon is that with the Kindle Oasis, the company has hit its peak Apple moment.

What do I mean by that, exactly?

Amazon has clearly reached a point in its evolution with the Kindle that it has achieved near-monopolistic market control, apex agility in terms of managing its supply chain, and sustained consumer zealotry for its devices, much like Apple has with its iPhone and iPads.

Its customers love them and keep coming back to buy new ones, again and again.

Part of this is due to the company's fantastic customer-first focus and its Prime program which brings more and more added benefits every year that leverages Amazon's many online services, and the excellent industrial design of the Kindles themselves.

Like Apple, Amazon can create very large margins for these things and basically nobody will baulk because you can't buy a Kindle ecosystem-compatible e-paper reader anywhere else.

Amazon now has stratification across the Kindle product line to basically please everyone and still have very good margins. In some ways they are in better shape than Apple in this regard because they have a $80 device all the way up to a $380 device.

And unlike Apple that has to compete with Android, the Kindle competes with essentially nothing. All of its competitors in the e-paper space have either exited the market or have very little market share to speak of.

Sony's reader business is long gone. Barnes & Noble's NOOK business is on life support and is begging for euthanasia.

Kobo has produced some nice hardware, it competes fairly well in the global market, and the company appears to be healthy. However it only has single to low double digit market penetration in the US when compared with Amazon's e-book and content business.

The Kindle e-books platform rules the space, in both hardware and as a content delivery platform. Mission accomplished.

So, getting back to Kindle Oasis. I don't know how many folks are going to buy a high-end reader like this. I thought $200 for the Kindle Voyage, which was previously Amazon's flagship reader device, was a lot of money.

This thing is even more expensive.

But I do have an idea of the use-case scenario that may have prompted the development of this device and may bring some clues as to who they are targeting.

The Oasis is Amazon's market play equivalent to Apple's 12.9" iPad Pro. What do I mean by that, exactly?

The Oasis is expensive but obviously a massive amount of engineering went into it. It's two ounces lighter than the previous upper end model, the Voyage, which was already the lightest Kindle in the lineup.

The device can be used for months at a time without charging, and has additional back-lighting LEDs.

All of this points towards people who do most of their reading at night, such as C-seats and attorneys. Professionals.

As nice as the iPad Pro is, or even the Surface 4 Pro or the Surface Book is, there's no comparison between e-ink screens and IPS LCD in terms of eyestrain relief. e-ink beats them hands down.

You don't want to shine a backlit LCD into your eyes at night, it's absolute murder on your sleep cycle.

Execs who do a lot of night time reading may very well be a large subset of their overall customer base because a lot of these types don't have time to read during the day. You have to think Amazon did a great deal of market research before releasing a device like this.

You're definitely going to buy the Oasis if you spend several nights a week burning the midnight oil or have your rear end planted in First Class half the time.

But Amazon doesn't need to move gigantic volumes of these things, it only has to continue to capture the execs. It's essentially a cost of doing business, a way of keeping them planted in their e-book and overall content and retail ecosystem.

Has Amazon reached its Apple moment? Talk Back and Let Me Know.