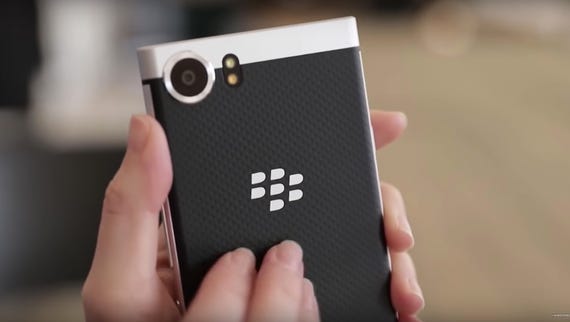 My last column discussed Motorola's latest attempt to revive the long-dormant Razr brand, one of a few phone brands from the pre-iPhone era that have made a pitch for market relevance, primarily through brand licensing. (Doing it well: Nokia. Not so much: Palm.) But perhaps no legacy phone brand was hit as hard philosophically by the iPhone transition as Blackberry. Its focus on quick, keyboard-centric navigation was swept aside by the multitouch display the same way DOS was swept away by the Mac.

Eventually, the company brought its own graphical OS to market. But it was too late by then. So Blackberry exited the smartphone market and licensed its brand to electronics giant TCL, which positioned Blackberry Mobile as a high-end, privacy-focused alternative to its low-end value-driven Alcatel brand. At CES 2020, the company made much of its new push to sell phones under its own brands, hoping to repeat or exceed the headway it has made with a line of self-branded TVs that once carried the RCA brand. But, it said, it still saw room in the market for both Alcatel and Blackberry.

Blackberry, though, apparently disagreed and has refused to renew its brand license with TCL for Blackberry Mobile devices. It's rare when a licensor decides to withdraw a license for reasons other than negligence. TCL did not release many Blackberry devices, and it had its share of shortcomings, but its last device, the Key2, honored the brand's legacy with privacy checkups and the best keyboard on a modern smartphone, complete with many clever shortcuts. Had such a marriage of Blackberry and Android surfaced instead of Blackberry 10 in 2010, Blackberry's smartphone business might have survived.

Why, then, would Blackberry, the company now focused on enterprise mobile security management and automotive technology, end the TCL license? Based on a TCL tweet, it seemed as if TCL was eager to keep producing Blackberry Mobile devices. That leaves a range of possibilities. Perhaps the sides simply couldn't agree on a price. Perhaps Blackberry considered the phone business a distraction (although, as my Techspansive podcast co-host Shawn DuBravac notes, the company still gets a third of its revenue from licensing including patents). Perhaps Blackberry's automotive customers wanted it to interface with more popular phone brands like Samsung and Apple and the license was seen as detrimental to those efforts. Or perhaps Blackberry saw TCL's push to pursue its own branded devices as too competitive.

There's also the far-fetched possibilities that Blackberry got a better offer or would re-enter the phone market itself. Such a direction would run counter to the "distraction" possibility, and no one can say what Blackberry may have cooked up in its labs in the past few years. It would not be the first time that the resilient smartphone brand had escaped an apparent deathtrap. And the timing of demise would be strange for a device with a following that was so passionate that its nickname combined its brand and a highly addictive drug.

TCL will stop selling BlackBerry smartphones in August
This could be the end of BlackBerry phones.

Join Discussion for: With no brand license, Blackberry Mobile...