Construction on the Square Kilometre Array is expected to begin in 2020.
Written by Asha Barbaschow, Journalist on Feb. 25, 2019 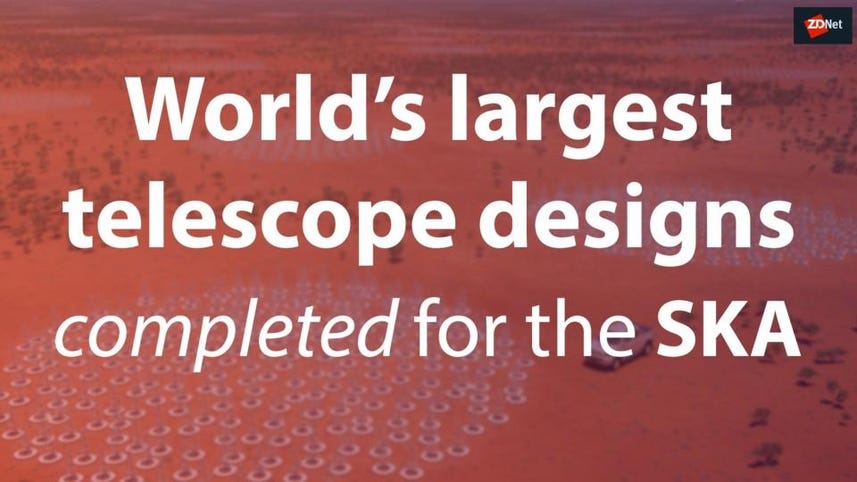 The Square Kilometre Array (SKA) Infrastructure Australia consortium, led by the Commonwealth Scientific and Industrial Research Organisation (CSIRO) and industry partner Aurecon Australia, has announced completing the design of the local infrastructure for what will be the world's largest radio telescope.

The team, comprised of Australian engineers and scientists, designed everything from supercomputing facilities, buildings, site monitoring, and roads, to the power and data fibre distribution that will be needed to host the instrument at CSIRO's Murchison Radio-astronomy Observatory in remote Western Australia.

The SKA is slated to be the largest and most capable radio telescope ever constructed, covering over 1 million square metres of collecting area.

The SKA is an international project that will consist of thousands of antennas spread across the world, with central cores of operation in South Africa and Western Australia.

"The data flows will be on the scale of petabits, or a million billion bits, per second -- more than the global internet rate today -- all flowing into a single building in the Murchison.

"To get this data from the antennas to the telescope's custom supercomputing facilities we need to lay 65,000 fibre optic cables."

The SKA will explore the universe in unprecedented detail, CSIRO explained, doing so hundreds of times faster than any current facility -- its central computer alone will have the processing power of about 100 million PCs.

According to CSIRO, the SKA telescope will be so sensitive that it could detect an airport radar on a planet tens of light years away.

"This sensitivity will revolutionise our understanding of the Universe and the laws of fundamental physics," the organisation wrote in a blog post. "Astronomers will be able to track the growth of millions of galaxies through cosmic time, perhaps finally nailing the nature of the mysterious 'dark energy'. And they'll be able to trace the giant magnetic fields that run through the universe, learning what generates them.

"Astronomers also hope that the SKA will find something they've spent decades looking for: a pulsar orbiting a black hole. Such a discovery would let them make the most demanding test yet of Einstein's theory of gravity."

CSIRO and Aurecon engineers had previously worked together on the infrastructure design for the Australian SKA Pathfinder telescope, CSIRO's 36-dish radio telescope, that is already operating at the Murchison Radio-astronomy Observatory.

Aurecon's senior project engineer Shandip Abeywickrema said the design team's biggest challenge this time was minimising radio "noise" created by the systems placed at the high-tech astronomy observatory. He also said it was essential to avoid drowning out the faint signals from space that the telescope is designed to detect.

"Containing the interference created by our own computing and power systems is an unusual construction requirement," Abeywickrema said. "We're trying to reduce the level of radio emissions by factors of billions.

"For example, the custom supercomputing building is effectively a fully welded box within a box, with the computing equipment to be located within the inner shield, while support plant equipment will be located in the outer shield."

The design work was funded by the Australian government and the European Union.

These consortia represent 500 engineers and scientists in 20 countries.

Construction on the SKA is expected to begin in 2020.