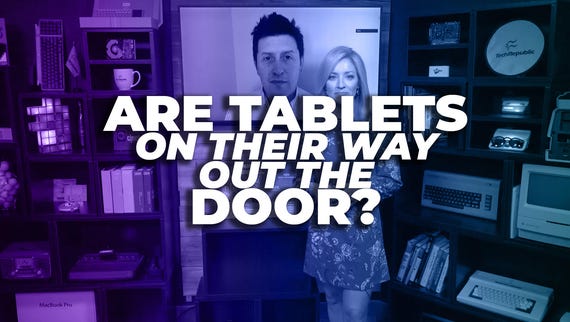 Are tablets on their way out the door?
Watch Now

All but the smallest iPad now have Smart Keyboard Covers that turn them into functional 2-in-1 devices. At $329 -- plus another $159 for the accessory -- there are far less expensive options in the market. Recently, I wrote about the fate of Android tablets as they went from being the slate-light hope embraced by major phone and PC companies to the domain of no-name brands at Walmart. But their fall in status hasn't rendered them incapable devices there. The giant retailer's website has become a hub for low-priced 10-inch Android tablets paired with keyboards. Its own brand Onn joins tablets featuring licensed retro brands such as RCA and Packard Bell, as well as lesser-known names such as SmarTab, Ematic, and iView. All represent a more integrated 2-in-1 experience versus Target's closest answer: A 10-inch tablet from a company called Linsay and a companion Bluetooth keyboard case.

Of the Walmart crop, the two that have garnered the highest reviews have been the Onn tablet from the retailer itself and the AirBook from Packard Bell, both selling for between $90 and $110 depending on the promotion. (An RCA offering is rated almost as highly and sells for only $69.) The AirBook is a relatively recent addition bearing the brand Southern Telecom licensed in 2016; HSN sells a version with more flash memory and a charging dock. For those who remember the cheap Packard Bell desktops (oh, those mice!) that competed with the likes of eMachines, note that the logo has undergone a welcome redesign -- although, confusingly, visiting packardbell.com reveals an older logo and product portfolio that Acer sold outside the United States after it acquired the brand in 2008.

The AirBook and Onn are similarly thick, especially with their folios. But the Onn -- with its overlapping clasp and lack of branding on its folio case, more pronounced corner curves, and tapered side bezels half the width of the Packard Bell's -- makes a more refined impression. The Packard Bell tablet is held upright by bending a hinge in the midpoint of its upper half. This allows for more flexible angles but requires a fair amount of force. The Packard Bell case also holds the tablet in place more securely than the Onn's

The Onn keyboard also has a Function key, which can activate the useful Home, End, PgUp and PgDn functions, but nothing else. On the other hand, the Packard Bell keyboard has a trackpad where clicks are activated by tapping the surface. It's not as satisfying as the reaction from a real trackpad, but it's still preferable to having to rely on the touchscreen as one must with the Onn folio.

Walmart's intrusion into the user interface, which also appears on the 7-inch and 8-inch Onn tablets, is its asterisk-like logo on the button bar to the left of the Back triangle. It reveals five Walmart apps; these include its eponymous shopping app and four other immutable icons: Walmart Grocery, Sam's Club, Vudu and Walmart e-books, a partnership with Rakuten's Kobo. While the icon is tiny, the retailer should've made another choice, like placing the app shortcuts on the home screen, even if the apps themselves couldn't be completely deleted. (Disabling the app doesn't remove it from the Walmart app screen.) The icon throws off the visual balance of Android's button bar, and it's silly to think that consumers always need these apps to be just a tap away, particularly for apps such as Sam's Club, Walmart's warehouse club that requires a membership.

As far as the tale of the tape, the Onn ships with just 16GB of flash memory; the AirBook has 32GB. However, the Onn features 2GB of RAM as opposed to the Packard Bell's 1GB. The Onn supports both 2. GHz and 5GHz Wi-Fi. The AirBook supports only 2.4GHz. The Onn display is warmer the AirBook's, which may be helpful for extended reading, particularly in the evening. The Packard Bell ships with Android 8.1/Oreo Go edition and includes the Go versions of several apps. The Onn ships with Android 9.0/Pie.

Among major retailers, Walmart may offer the cheapest Android 2-in-1s, but it's not the only retailer to feature them. Barnes & Nobile, which long ago lost the war with Amazon for e-book supremacy, nonetheless continues to sell tablets with that application in mind. The 10-inch Nook joined the portfolio late last year after a house brand tablet hiatus in which the bookseller featured only Samsung tablets, which it continues to offer. The retailer offers the keyboard cover and a charging dock as accessories. Unlike Amazon's tablets, they support the Google Play app store. But unlike the models sold at Walmart, the Nook tablet and keyboard are sold separately, with the latter adding about $40 to the $130 for the 10-inch Nook tablet.

Compared to the AirBook and Onn, the Nook has a narrower aspect ratio and offers elements of each -- the 5GHz support and lack of trackpad of the Onn with the adjustable hinged folio and larger flash capacity of the AirBook; its keyboard has the same key layout and quirks of the latter.

Android tablets: From Google rollouts to Walmart Rollbacks
Once seen as a way for a wide range of tech companies to answer the iPad, Android tablets are now offered by only a handful of brands. But even as Google has walked away from them, they still have a home in retail.

Barnes & Noble Nook 10.1-inch is a new reading tablet (really) for $130
The tablet is available for preorder now and will come out Nov. 14.

Walmart to take on Amazon Fire with a trio of cheap Android tablets
The new devices, which include a $64 8-inch and $79 10.1-inch slate and a $99 10.1-inch model with a detachable keyboard, go on sale this week under the company's Onn electronics brand.

Join Discussion for: You can buy four of these Android 2-in-1s...