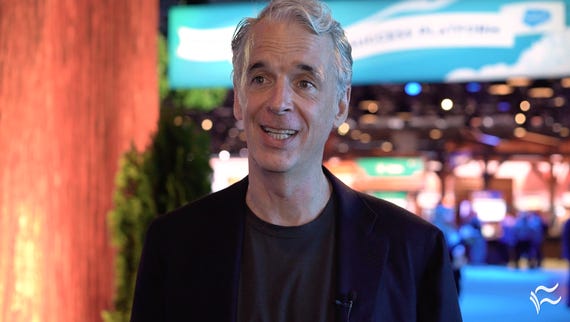 This article originally appeared on TechRepublic.

Cisco CEO Chuck Robbins said there is a continued explosion of the Internet of Things (IoT), blockchain, virtual reality (VR) and augmented reality (AR), and there's a strong need to rearchitect networking to accommodate dynamic environments.

Speaking during the opening keynote at Cisco Live 2019 in San Diego, Robbins focused on the role of technology in our world in 2019 versus 1989 when Cisco held its first conference called "Networkers" that eventually became Cisco Live.

"Think about how things have changed and the point is how critical technology has become to the world in general and frankly how important it's become to all of us. Technology actually sits in the middle of our personal relationships. We communicate through technology, there was this crazy time way back where we used to speak to each other. It was an amazing time. Now we text, we WeChat, we WhatsApp, we do all sorts of things. But it's changed everything," Robbins said.

"If you don't believe technology is at the heart of everything going on around the world, just look at the geopolitical landscape. We have trade wars, we have debates about 5G, we have tariffs. And most of those discussions have an element of technology about them," he said.

Compliance is a growing issue as the government looks at the role of technology companies, which ties into automation and policy enforcement work that Cisco is doing, Robbins said.

One of the biggest topics is multi-cloud connectivity as users have multiple devices on a range of networks.

Security is an ongoing concern, with 20 billion security threats daily, which breaks down to one every 39 seconds. Privacy is another topics that people care about. "We all believe privacy is a basic human right and as we see governments around the world beginning to implement things like GDPR, it affects our jobs. We have to think about those things," Robbins said.

Cisco is also working to help companies better use the data they collect. "Some research says we're only getting insights from less than 1% of the data we collect in organizations. We want to help you do more," he said.

David Goeckeler, Cisco executive vice president and general manager of networking and security, joined Robbins on stage to talk about networking and security innovation to accommodate users. The new set of challenges that Cisco is working on includes users constantly changing the networks they're on or the device they're using.
"On the application side of network, all the applications are going to the cloud. But it's not that simple. They're in the cloud, they're SAAS providers, there are applications at the edge…applications are everywhere and they're changing all the time," Goeckeler said.

This dynamic multi-domain environment means that new networking technology must be built to solve the issues that come up.

"We have to rearchitect the entire portfolio for the world we live in today," Goeckeler said. This includes IoT and OT, as well as the data center, cloud providers, service providers and network security.

Wi-Fi 6 and 5G were hot topics at the keynote, with Scott Harrell, senior vice president and general manager of enterprise networking business for Cisco stepping on stage to talk about these new technologies.

"When you think about these new technologies, they bring out how your wireless network can support things it never could before. Things like AR and VR," Harrell said. "That opens up the opportunity for the network to do things it couldn't do before. The reality is it's not going to be a 5G or Wi-Fi 6 world, but where both are critical. You'll use 5G outdoors and Wi-Fi 6 indoors."