Ethernet: Why your home office could use more of it

Nearly 50 years old, this networking technology remains one of the best ways to connect home and office equipment to the internet. We review the many options.
Written by Jason Perlow, Senior Contributing Writer on Feb. 18, 2021 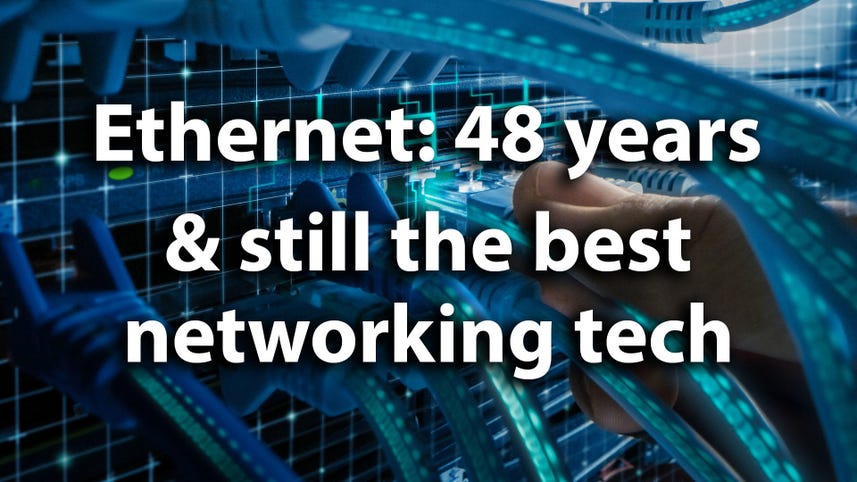 It's been almost a year since many of us started working from home, and it doesn't look like that's going to change anytime soon. In previous Jason Squared shows, Jason Cipriani and I have talked about securing your home internet and even how to improve your Wi-Fi signal. However, there are alternative ways to improve connectivity throughout your home. Today, we will talk about one of the oldest -- and perhaps still one of the best ways to connect your equipment to the internet -- Ethernet.

What the heck is Ethernet, exactly?

Ethernet is a wired network communications standard developed in the early 1970s by a computer engineer named Bob Metcalfe (who, for many years, was also a well-known computer industry columnist at InfoWorld and also was responsible for forming 3COM, which HP later bought in 2010) and his team of researchers at Xerox's Palo Alto Research Center.

Why do we want to use Ethernet at home?

Chances are, you probably already do use at least some Ethernet at home. Most consumer broadband installations will have a residential gateway that incorporates Wi-Fi and some broadband access device, like a cable modem or an optical network terminal (ONT). Those will be connected with a short Cat-5 or Cat-6 Ethernet cable and the modular RJ-45 8-pin connector.

There are many homes in which that's likely the extent of their Ethernet install. But all home routers/residential gateways have at least one or more additional Ethernet ports on them, allowing you to expand that Ethernet network. So, for example, in my own home, with my AT&T ARRIS residential gateway (the main router), I have a few extra Ethernet ports. I have a 24-port Ethernet switch connected to one of these to add more Ethernet-connected devices.

But you're not stuck with the number of ports on your router. An Ethernet Switch is like the USB hubs you can buy for your PC or Mac. If you run out of Ethernet ports, you buy a switch, and it will give you more network interfaces.

Why would I want to connect more devices to Ethernet rather than use Wi-Fi?

There are a lot of reasons. Ethernet is super-reliable for starters. It is secure; it's far more difficult for someone to sniff your network traffic if you use Ethernet, especially if you are using something like a VLAN. It's also considerably faster than the network connectivity you will get in most home environments with Wi-Fi. Even with Wi-Fi 6, you will only get 450Mbps to 650Mbps speeds under optimal conditions; you will still get interference and latency. But with my 1Gbps fiber connection from AT&T, I frequently get over 900Mbps downloads, close to wireline speeds, when using a computer connected to the Ethernet switch.

The other thing that's good about Ethernet is it has pretty high distance limitations, like about 100 meters per run. So you can get the full speed out of that cable over that distance. This is good to have if you have a multi-story home, where you might have, say, an entertainment center in your basement or a bedroom on an upper floor that you want to have high-speed network connectivity.

Perhaps the Wi-Fi from the bottom floor or even your mesh network just isn't cutting it because there are too many walls or whatever. You can bridge your network using a Wi-Fi access point using Ethernet, and a long cable runs to the switch or the router. You need to be able to drop that cable through a wall soffit, through the attic, or a crawlspace, or run it along the wall under the carpet to where it has to go.

In my case, my office is in the room next to where all my broadband equipment is, so I hired a handyman to install an Ethernet jack on both sides of the adjoining wall. But I know many people who have just drilled through the wall, bore a hole, and put an inexpensive plastic plate there or a grommet kit that is used for pushing cables through. You can get those at Home Depot.

Is it expensive to build out your Ethernet network?

It doesn't have to be expensive. I frequently see unmanaged desktop 16-port Gigabit Ethernet switches from Netgear, TP-LINK, and D-Link on Amazon for less than $60. You can buy pre-fabricated cables that are as long as 100 feet for about $22 from Best Buy or Amazon, and I have seen them as cheap as $12 at Walmart, too. But you can also crimp your own cables with a crimping tool and buy the twisted pair cable spools and the RJ-45 heads, and that's not that expensive if you have to do your own wiring.

Many streaming devices have Ethernet ports already built-in, such as the Roku, the Amazon Fire TV, the Apple TV, and gaming consoles like the Xbox and the Playstation. Network adapters for laptops are also not that expensive. We talked about hubs a few weeks ago; many on the market include Ethernet and HDMI and extra USB-C and USB-A ports for like $40, such as the one from Anker.

What about the pricier Ethernet switches?

The higher-end models are managed switches and are more expensive because they have special segmenting and security capabilities, such as for VLANs. These are typically for small and medium business use. But the other thing these more expensive switches can do is Power over Ethernet or PoE.

In addition to carrying Ethernet communication, a Cat5-Cat6 twisted pair cable can also carry power. That means, if you wanted to place, say, a Wireless Access Point in some remote part of your house or in your small business where no AC power outlets exist, all you need to do is string the Cat5 cable to that location and plug in the device. This is useful for broadcasting a Wi-Fi signal to a wide-open area and mounting an access point on a ceiling.

For example, in my house, I have my main AP mounted high on a wall in my living room, and that signal can reach a large part of my house. It's powered by a PoE switch connection in a spare bedroom where all my communications equipment is, including the broadband connection. To use PoE, in addition to a PoE compatible switch -- and you can get them as cheaply as $80 for an 8-port version -- you need to have a device that can be powered by PoE, such as a business-class access point. You can find these on Amazon for like $100 or less; Netgear has a Wi-Fi 6 one for $130. Som if you're having a tough time with mesh networking routers -- like I have -- this is another way to get whole home or whole business Wi-Fi coverage.

What if I can't string Cat5 in my home?

There are other ways of moving Ethernet. One way of doing that is MoCA, or Multimedia over Coax, which uses the Coaxial cable you might already have in your home from back in the Cable TV or the Satellite TV days. Many homes have to coax installed many years ago, but you can also coax outdoors and back into your home if needed, as it is a thick, shielded copper cable that is designed better to be protected from the elements. A MoCA adapter is a device connected in pairs, so you have one at one side of the coax cable you want to send Ethernet signal and one at the receiving end where you might put a switch or, say, an access point or something else. Actiontec, for example, sells these in pairs for $170. It advertises up to 2.5Gbps speeds over existing coaxial cable, which is extremely fast. Trendnet sells a similar product for $110, and you can also get that on Amazon.

What if you don't have coax or don't want to run new coax?

Finally, we get to something called Ethernet over Powerline, or HomePlug AV2, which is like the opposite of PoE; we are sending Ethernet signal over the AC power wires that are already inside your home. Again, this uses a pair of devices. One is plugged into the wall, and then Ethernet is cabled to your switch. Another one is plugged into the wall where you want the Ethernet signal transmitted to, and then there's an Ethernet cable coming out of that, which plugs into whatever you want to plug it into. Using this method, it's possible to have these adapters plugged into outlets all over your home, so your electrical system becomes one big network.

Now there are some gotchas to this: If your wiring is ancient and janky, this might not work. You also might not get good throughput out of this, either. However, it is theoretically possible to get up to a gigabit connection doing things this way. You can get the Homeplug AV2 adapters in pairs for about $70$80 on Amazon, and companies like Netgear, Trendnet, TP-Link, and D-Link make them. In my home, in the past, I've seen as high as 400Mbps per second when extending my living room's entertainment center with this type of equipment -- which is about par for the course with the fastest most people are going to see with 802.11ac Wi-Fi in optimal scenarios.