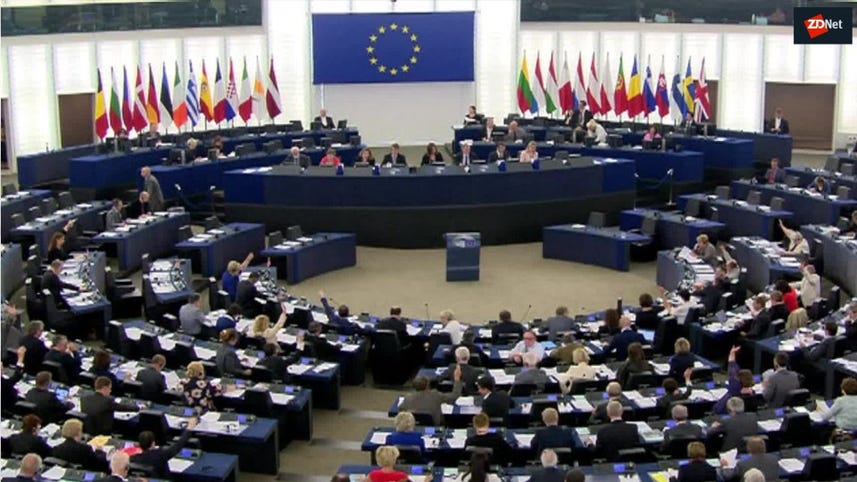 On Sept. 12, European Parliament voted for the Copyright Directive. This updating of online copyright tries to make certain media companies and publishers are paid for their work when shared on Facebook or YouTube and aggregated by such sites as Google News.

Articles 11 and 13 of this law has been harshly criticized both by internet experts and companies. Article 11 grants publications copyright over any online content sharing. In practice, this means sites could charge services like Hacker News and Reddit for aggregating their stories. This is being called a link tax.

Axel Voss, a European Parliament member and one of the law's creators said, "I'm very glad that, despite the very strong lobbying campaign by the internet giants, there is now a majority in the full house backing the need to protect the principle of fair pay for European creatives."

He continued, "I am convinced that once the dust has settled, the internet will be as free as it is today, creators and journalists will be earning a fairer share of the revenues generated by their works, and we will be wondering what all the fuss was about."

The fuss is -- according to, not American internet giant companies, but the people who built the internet -- about: "By requiring internet platforms to perform automatic filtering all of the content that their users upload, Article 13 takes an unprecedented step towards the transformation of the Internet from an open platform for sharing and innovation, into a tool for the automated surveillance and control of its users."

Internet and web pioneers, including Vint Cerf (internet co-founder), Tim Berners-Lee (creator of the web), Brian Behlendorf (programmer of the Apache web server), and many others, continued: "Far from only affecting large American Internet platforms (who can well afford the costs of compliance), the burden of Article 13 will fall most heavily on their competitors, including European startups and SMEs."

In addition, as Cory Doctorow wrote on the Electronic Frontier Foundation (EFF) blog: "This measure will will censor the internet and it won't even help artists to get paid." He reasons, "Bad actors could use armies to bots to block millions of works at a go (for example, jerks could use bots to bombard the databases with claims of ownership over the collected works of Shakespeare.)"

Even if such efforts are corralled, Article 13 opens the door to copyright trolls. By claiming copyrights, justified or not, on all matter of works, trolls will profit and force smaller sites out of business. Google can afford to deal with them -- new or small companies can't.

True, the EU stated,"The text also specifies that uploading to online encyclopedias in a non-commercial way, such as Wikipedia, or open-source software platforms, such as GitHub, will automatically be excluded from the requirement to comply with copyright rules."

But it doesn't provide any methods to actually do this.

As for Article 11, the EU claimed, "merely sharing hyperlinks to articles, together with 'individual words' to describe them, will be free of copyright constraints."

When was the last time a link was described with individual words? What does that even mean?

There have been previous attempts to make sites pay for story links. They failed. Google, for example, closed down its Google Spanish news site rather than pay it. The result was Spanish news publication lost millions.

This new law won't take effect yet. Individual EU countries will vote on it before it returns to the European Parliament for final approval in early 2019.

Let's hope they do the right thing and throw Article 11 and 13 out.