When I first started using the Internet, it wasn't that far removed from its Arpanet ancestor. When I was at school, I could connect with it at a blazing fast 10 Megabits per second (Mbps) over Ethernet. From home or on the road I could only hook up at 300 bits per second (BPS) using both a TI Silent 700 paper terminal with its acoustic coupler or from a CP/M computer using a Hayes Smartmodem 300. It was great in its day, but it was never fast enough. Today, I have a cable internet connection that, in theory, can get up to 1 Gigabit per second (Gbps). It's still not fast enough.

That's because back then all I was working with was text and even that was limited to 25 lines with 80 columns per line. It's a different story now. Today, I do video conferencing, watch 4K TV shows and movies, and pour gigabytes of data across the net. I really can use a Gbps connection. But what about you?

What internet speeds are recommended? 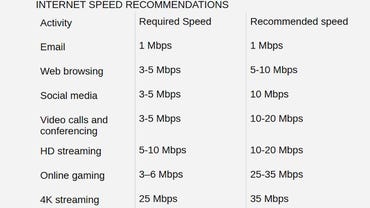 Your local Internet service providers (ISP) will happily give you recommendations on their websites, but keep in mind they want to sell you more bandwidth. ISPs can also mislead you about what they can actually deliver. Over the years, I've been told by ISPs they could hook me up with connections they literally physically couldn't deliver. And let's not even talk about their speed guarantees, which more often than not are wishful thinking.

So, here's a good list of what you're probably doing on the net and how much bandwidth you need to do the tasks without wanting to tear your hair out.

That's fine as far as it goes, but it's not enough. For example, even if you only have one or two people in your home, there are more than 10 internet-connected devices in the average US home. Besides the ones you first think of -- computers, streaming devices, and gaming consoles -- there are also smartwatches, Internet of Things gadgets, and even pet-tracking devices. If you're using these devices all the time, then you'll want to have enough bandwidth to power all of them.

How many devices are you using?

For example, right now, my partner is streaming the 4K TV show Shadow and Bone. I'm backing up my video archives, which run to terabytes of data, to my remote Nextcloud server while checking e-mail in the background and looking at websites. In a few minutes, I'll be on a work video conference. So, altogether, I'm currently using 100Mbps. When my grandsons are over, they go to school virtually, love to stream Paw Patrol, and love their online games, so we can easily crack 200Mbps.

What is your situation?

Now think about your situation: Are you working from home? Do you have a large family with several TVs? Are your kids going to school online? Chances are you're closing in on 100Mbps at any given time.

Another factor that didn't use to matter to most people but does now is your upstream speeds. Except on fiber internet connections, most internet technologies offer far lower upstream speeds than down. For example, my Gigabit plan gives me in real life no more than 800Mbps down, but only 40Mbps up. Yes, that still sounds fast to most of you, but if you're doing a lot of online classes or video-conferencing you can run right into those limits and end up with a bad connection.

Will you get advertised speeds?

You must also keep in mind that what ISPs promise they'll deliver in the way of bandwidth often isn't what you get. For example, the Federal Trade Commission, along with law enforcement agencies from six states, recently sued Frontier Communications, alleging that the company didn't provide many consumers with the internet speeds it promised them. And, adding insult to injury, the company charged many of them for more expensive and higher-speed service than was actually provided.

In my experience, this is all too common. According to AllConnect, a company that helps users find the best telecommunication deals, "15% of internet users, or 45 million people, are getting less than their advertised speeds." Of those, "Fiber and cable internet have the biggest gap – with most people getting, on average, about 55% of the speeds they pay for."

Now if you could simply shop for an ISP that wouldn't be so annoying. You'd just go with the ISP that actually delivers the broadband goods. Unfortunately, as the non-profit Institute for Local Self Reliance points out, "83.3 million Americans can only access broadband through a single provider."

Are you a heavy internet user?

Even if you are paying for high bandwidth, you may not always get it. ISPs often throttle your service if you're a "heavy" internet user or during "times of high traffic." To see if this is happening to you, run a speed test, and note the results. Then download and turn on a good virtual private network (VPN). Usually, your numbers will be less when you're running a VPN. Security comes at a performance cost. But, if you get better speed with a VPN, odds are you're being throttled.

Finally, if you really aren't getting enough bandwidth with your current plan and you have no other options, I hate to say it, but you can always pay for a higher-level plan to get the speed you really need.

What are the different types of ISPs available?

If you do have a choice of ISPs and internet delivery technologies, I recommend, in this order, the following connection types: Fiber, the fastest of the fast; cable, can be good on downstream speeds, but tends to be much slower on upstream; and LEO satellite and 5G internet are both good, but they're still in their teething stages and their performance can be erratic.

Then, there are the connections I can't recommend, but if you have no other choice in the matter, well then you have no other choice. DSL, when you can still get it, is decent with real-world speeds in the double-digit Mbps down and single-digit Mbps up. But AT&T is getting out of the DSL business so you can no longer get it. If your DSL connection goes out, I've had AT&T customers tell me Ma Bell won't fix it.

Traditional satellite internet companies, HughesNet and Viasat are better than nothing if you live out in the country. But their download speeds max out, in my experience, at 30Mbps. Upload speeds are stuck around 3Mbps. The real killer though is the latency. With 300 to 500 milliseconds between pressing a key and seeing a result, video gaming and conferencing are next to impossible to pull off. Both services have data caps that will slow your down speeds to about 3Mbps if you use too much data.

Finally, if you've got nothing else, believe it or not, dial-up modem ISP services still exist. These are cheap but at a top speed of 56 Kilobits per second (Kbps) no one will want to use these today unless they literally have no other choice.

Ready to look for another, better ISP or at least a better connection? I wish you luck. Me? I'm trying to find my way to a 10Gbps home-office connection.

Join Discussion for: How much internet speed do you really need?