It is the telco's fifth acquisition in less than 12 months.
Written by Campbell Kwan, Journalist on Feb. 13, 2020 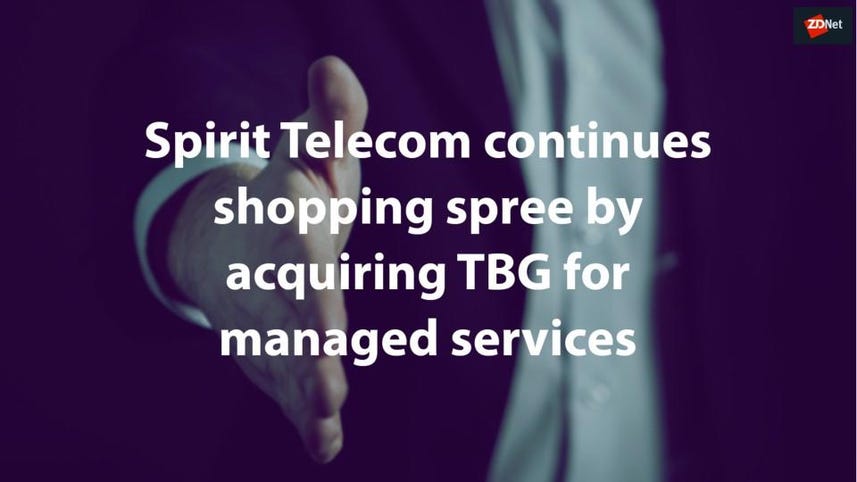 The acquisition will set Spirit back up to AU$6.9 million with the amount to be paid as a combination of cash and Spirit equity; it will be comprised of 75% cash and 25% Spirit shares.

TBG will slot into Spirit as a new business segment, called Trident IT solutions, that will focus on delivering cloud-based IT and internet solutions for schools, hospitals, aged care, and the hospitality industry.

According to Spirit managing director Sol Lukatsky, TBG was acquired as it puts the telco in a position to deliver cloud-based IT and internet solutions for "high growth verticals" that are moving through a "major technology change".

"This is a transformational period for Spirit and through the acquisition of these businesses, Spirit will build and strengthen cloud, security, data, and managed IT services capabilities whilst providing entry into target growth vertical including schools, health, and aged care," Lukatsky added.

"The existing Spirit IT&T division will continue to focus on the SMB sector with the new Trident IT Solutions Division targeting higher value complex segments."

Trident CEO, Katie Bentley, will become the CEO of Trident IT Solutions while the current Neptune CEO, Geoff Bentley, will take on the role of Spirit's chief sales officer.

"It is a really exciting time to be joining Spirit, and I am ecstatic to be joining in the capacity of CEO of Trident IT Solutions," Bentley said.

TBG is the fifth acquisition Spirit has made in less than 12 months. Prior to hooking into TBG, the telco had acquired four other companies as part of efforts to expand its offerings: LinkOne Group, Building Connect, Arinda IT, and Phoenix Austec.

During its FY19 results announcement, Spirit Telecom said it had plans to grow its managed services capabilities and expects a double-digit percentage increase in turnover from FY19. Spirit Telecom earned AU$17.4 million in revenue during that period.

Aussie and NZ regulators issue orders and fines against telcos

The Australian Communications and Media Authority (ACMA) this week issued formal warnings to 15 telcos after investigations revealed that they failed to provide vital information for Australia's emergency services such as Triple Zero and the Emergency Alert system.

According to an ACMA investigation, the telcos in question breached the Integrated Public Number Database (IPND) rules by failing to provide customer data or provided inaccurate data to the IPND manager.

"The Emergency Alert system has been used extensively by emergency services over recent months to send a large number of SMS and make phones calls during the recent bushfires," ACMA chair Nerida O'Loughlin said. "While we're not aware of any specific harm caused as a result of these breaches, it's important that all telcos meet their obligations to provide accurate and timely information to the IPND."

Five of the 15 telcos that were given formal warnings by the regulator -- TeleChoice, Fuzenet, Kisa, Swift Networks Group, and TravelSIM Australia -- had a larger scale of non-compliance.

As a result, in addition to the formal warnings, ACMA gave these five telcos remedial directions to undertake independent audits and implement effective systems, processes, and practices to ensure compliance with the law.

Telcos that fail to comply with the remedial directions could potentially face penalties up to AU$10 million.

This is the latest action in the ACMA's two-year campaign to improve the accuracy of the IPND. At the same time last year, the communications regulator found 10 telcos, including Telstra, Optus, and Vodafone, had contravened the IPND rules.

On the same day that ACMA slapped the wrists of incompliant Aussie telcos, the New Zealand Commerce Commission fined three telcos for making false representations in invoices sent to customers.

From January 2012 and March 2018, the three telcos -- CallPlus Services, which trades as Slingshot; Flip Services; and and Orcon -- falsely told customers that internet and landline services would stop one month after they gave notice to terminate their contracts. However, the telcos issued final invoices beyond the one-month notice period to nearly 6,000 customers which resulted in customers over-paying around NZ$132,000.

"We expect businesses to have the processes in place to ensure that their invoices are accurate and compliant with what they tell their customers and with the Fair Trading Act. In this case, each company failed to take necessary steps to ensure they were. As a result, they misled and overcharged thousands of customers," Commerce Commission chair Anna Rawlings said.

All three telcos pleaded guilty in New Zealand District Court and were convicted in relation to 13 charges under the Fair Trading Act.

"It was incumbent upon them to put in checks and balances to ensure no misrepresentations. It was not inadvertent but nor was it deliberate. Rather, it was a failure to implement and then ensure proper processes were operating," Glubb said.

It has acquired four companies in as many months.

Proposal floated to provide telcos access to emergency fuel stores for the purpose of providing generators with backup power during emergencies.

It comes as the regulator continues to exercise its power under s313.

Laptop belonging to 'external provider' containing over 200 meeting and interview transcripts taken in burglary, which has seen the provider dumped.

It believes there are no particular problems or structural issues with the New Zealand mobile market.