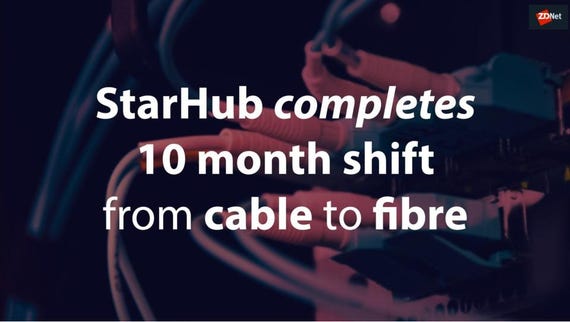 Singaporean telco StarHub has announced it has completed moving its pay TV and broadband customers from cable connections to fibre.

"Over the past 10 months, StarHub assisted hundreds of thousands of customers to migrate from cable services to superior, high-speed fibre services," StarHub chief of consumer business group, Johan Buse said.

"We are excited that all our customers can now fully benefit from higher broadband speeds, enhanced TV experience, and enjoy the rich services that fibre enables."

The telco told its customers that they did not need to return any cable boxes.

"Customers are invited to dispose of cable TV set-top boxes, cable modems, and routers at StarHub's e-waste collection bins across more than 450 locations island-wide," it said.

In its latest results, StarHub reported a 10% drop in mobile services for the second quarter, an almost 25% drop in Pay TV revenue year-on-year from SG$85 million to SG$65 million, a 2% drop in broadband services, and a 15% drop in equipment sales.

Overall, this gave StarHub revenue of SG$553 million for the second quarter, a decrease of SG$44.5 million from this time last year.

During August, Singaporean sovereign wealth fund Temasek agreed to purchase security firm D'Crypt from StarHub and its founders for an initial consideration of SG$100 million, that with performance payments to the founders could see the total transaction cost reach as high as SG$133 million.

StarHub purchased D'Crypt in December 2017, with that transaction having a maximum cost of SG$122 million. Under that deal, StarHub picked up 65% of the company at the time, with the remaining 35% to be gained from D'Crypt founders Dr Antony Ng, Chew Hwee Boon, and Dr Pang Liang Teck in the first half of 2021.

While Singapore is shifting from cable to fibre, Australia's National Broadband Network (NBN) is continuing to test increased speeds on the technology.

In July, NBN conducted a DOCSIS 3.1 test on a customer's hybrid fibre-coaxial (HFC) line at Templestowe, Victoria that clocked in at 994Mbps. The trial made use of more spectrum than most HFC lines do currently, thanks to a better bandpass filter.

"This is an important day for NBN. It shows how a specific technology -- HFC -- is evolving to meet customer demand for greater capacity from their broadband connection over time," NBN chief technology officer Ray Owen said at the time.

Temasek picks up D'Crypt from StarHub

Transaction expected to close in November, with an initial cash payment of SG$100 million.

Pre-orders to open at the Apple website starting on September 13.

Overall revenue was up, but so were overall expenses for the Singaporean telco.

Available to companies across seven industrial parks in the southwestern city of China, the dedicated data link has a total capacity of 260Gbps and is part of efforts to support connectivity between businesses in the region.