The best keyboards From mechanical to minimal, we compare the top options.

Launched at the start of November 2021 the Vissles LP85 mechanical keyboard is a slimmed down version of the optical-mechanical keyboard. Like the V84 the LP85 works in wired and Bluetooth mode. It has a simple uncluttered design.

The only other feature on the keyboard is a slider button to switch the keyboard mode to either Bluetooth or wired.

It has 85 keys which travel satisfyingly as you type. Total travel of the keys are 2.5 +/- 0.30mm which is reminiscent of old IBM keyboards if you remember them. 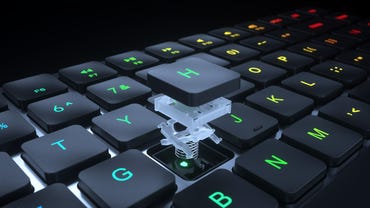 The LP85 has a slight slope angle of 2 degrees – which could be greater in my opinion – but is not annoyingly flat like some keyboards I have used. The keyboard height ranges from 0.31" - 0.34" – a low profile board indeed.

Unlike the V84, the LP85 has no spare key covers to change the layout between Windows and Mac layouts. However, the functionality can easily be swapped in the software by pressing the Fn and S (Mac) or Fn and A keys (Windows) to swap modes.

Additionally the keyboard can connect to three different devices via Bluetooth 5.0 and can swap between these devices by pressing Fn and Q (or W or E) followed by Fn and P keys.

Like the V84, the LP85 has a fancy array of RGB dynamic backlights under each key cap. There are 19 different combinations you can try by pressing Fn and Del – including seven monochrome backlight patterns achieved by pressing Fn and the right arrow key.

You can also manage media from the keyboard, play the next or previous track, change the volume, use F3 for the 3D flip taskbar, or invoke Explorer.

There are a bewildering array of command functions – but if you lose the user guide, Vissles have user manuals for its products at its brand link. Hopefully the LP85 manual will be added shortly.

The keyboard will go to sleep after 5 minutes and will hibernate after 30 minutes of inactivity to preserve its battery. However, as soon as you touch a key the keyboard wakes and flashes.

The only issue I had with the LP85 was when I was watching YouTube videos on my home theatre system with the keyboard next to me on the couch.

From time to time the video would stop playing and go back to the main YouTube menu which was irritating. This happened fewer times when the keyboard was placed directly underneath the ceiling mounted projector.

I cannot work out whether it is an issue with the keyboard, or my home theatre set up. I know this does not happen when I use my Wi-Fi keyboard.

I experienced this signal loss a couple of times when I used the V84, but discounted it. Now, I think it might be an issue with one of the pieces of kit. I will try a different Bluetooth keyboard to fully check the Bluetooth stack.

All in all, the Vissles LP85 is a superb optical-mechanical keyboard that is easily worth its $99 price tag on Kickstarter.

If you want a fully featured compact mechanical keyboard with an array of flashing lights, join its swelling ranks of backers (it reached its funding targets days ago) and grab yourself this keyboard. You will not be disappointed.