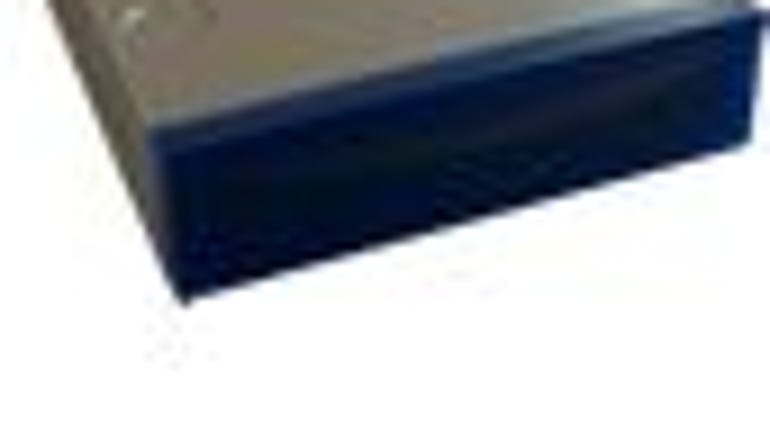 LaCie has released its range of USB 2.0 hard drives in plenty of time for the advent of this high-speed interface on new PCs. It's available in 40, 80 and -- as reviewed here -- 120GB capacities, and supports both Windows PCs and Macintoshes. It's an inexpensive way of adding external storage to your USB 2.0-equipped system.

We were supplied with the 120GB model costing £208.51 (ex. VAT), which is cheaper than Maxtor's Personal Storage 3000LE with the same capacity (but better performance). Neither the Business Disk WinMark score of 6,940 nor the High-End Disk WinMark 99 score of 11,400 are very impressive -– the latter is the lowest among the eight drives in the high-end test. LaCie’s own specifications for the drive put the maximum sustained transfer rate at 16MB/s.

At 6.4 by 20.0 by 27.6cm, this drive is larger than the equivalent unit from Maxtor, but this is due to its internal power supply -- the Maxtor 3000LE has an external brick. The slab-like blue and grey case will stack neatly with any other drive from LaCie’s StudioDrive range.

The front panel features only power and activity indicator LEDs. There are no downstream USB 2.0 ports on the back of the drive, so you won’t be able to daisy-chain any other USB devices from it. However, since the USB 2.0 adapters we’ve looked at feature at least three ports, this shouldn't present a problem.

The Desktop USB Hard Drive is based around a 5,400rpm Maxtor DiamondMax D540X hard disk, identical to the unit inside Maxtor’s own 3000LE product. Since the same 5,400rpm drive is used inside both products, the performance difference seen in our results must be down to the electronics that convert the USB signals from the PC to the Ultra-ATA signals that the drive understands.

Although it's not a particularly impressive performer, LaCie's external 120GB USB 2.0 product still represents a very economical way of adding a large amount of external storage to your system -- especially if you already have a USB 2.0 interface. This isn’t LaCie’s highest-capacity external drive, but for that you’ll need to use an IEEE 1394 interface. If you prefer USB, this drive delivers more gigabytes per pound than Maxtor's equivalent product.