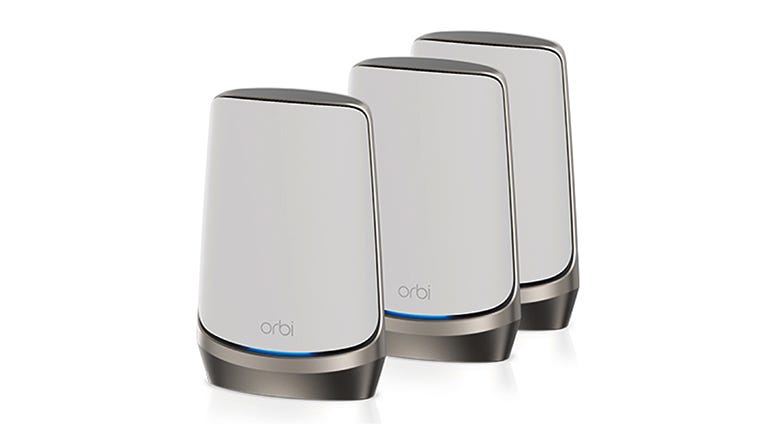 Netgear was one of the first manufacturers to introduce a router supporting the new Wi-Fi 6E standard, with its Nighthawk RAXE500. The company has now brought the latest 2.4/5/6GHz wi-fi technology to its Orbi range of mesh networking systems.

The new system -- the Orbi Quad-Band Mesh WiFi 6E System (RBKE963), to give its full name -- is primarily aimed at home users but, like the business-oriented Orbi Pro, it does have the ability to create multiple networks for different tasks or different groups of users. And, with its support for both high-speed Wi-Fi 6E and multi-gig Ethernet, the Orbi RBKE963 provides performance that will be ideal for working from home, as well as many offices or public venues that need a wide-ranging mesh network.

One obvious difference between the new Orbi and its predecessors is that it's now available in both black and white, as Netgear says that many users have requested the additional black option to match their home decor. It's slightly larger than its predecessors too, as the slimline upright units now house no less than 12 separate antennae in order to increase the network range and make the most of the greater speeds supported by Wi-Fi 6E.

Those speeds are pretty impressive too, as the quad-band Orbi uses Wi-Fi 6E technology to add a fourth Wi-Fi band on the 6GHz frequency, along with the existing two 5GHz bands and single 2.4GHz band already supported by Wi-Fi 6 and Wi-Fi 5. That 6GHz band alone supports speeds of up to 4.8Gbps, with an additional 2.4Gbps on each of the 5GHz bands, and 1.2Gbps on the 2.4GHz, to provide a total maximum speed of 10.8Gbps.

Netgear has also updated the Orbi's wired connectivity, to keep pace with the improved Wi-Fi performance. As always, the Orbi systems consist of a primary router and a number of additional 'satellites', which link together to form the mesh network. The main router now provides a 10Gbps Ethernet WAN port for high-speed internet connections, and both the main router satellites also include one 2.5Gbps Ethernet port and three Gigabit ports for wired connections.

Like the Orbi Pro models that are specifically designed for business users, this new Orbi model has the ability to create multiple networks (SSIDs). There is one network on the 6GHz band that can be devoted to new devices, such as smartphones and computers -- or even Samsung's new 8K OLED TVs -- that support Wi-Fi 6E. One of the 5GHz bands provides the main, general-purpose network, with the second 5GHz band acting as a dedicated 'backhaul' that connects the router and satellites. Finally, the 2.4GHz band acts as an IoT network for devices such as smart lights and security cameras.

Netgear has told us that there's a 2-piece kit with one router and one satellite planned for future release. It's also worth noting that regulatory approval for use of the 6GHz band differs in the UK and US, so UK users may find that quoted speeds and coverage areas may differ when the Orbi RBKE963 goes on sale in the UK.