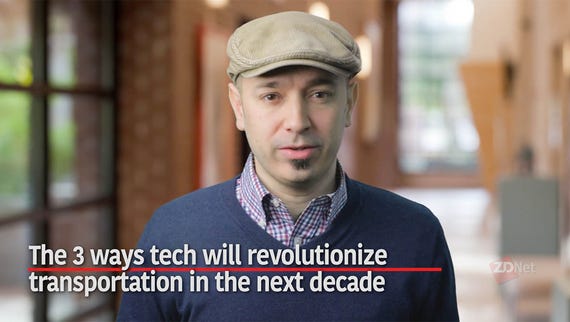 The most powerful factor that's going to transform society over the next decade will be the revolution in transportation. From self-driving taxis and tractor trailers to autonomous flying drones to 30-minute rides from LA to San Francisco on a hyperloop, we're about to witness a series of a massive disruptions.

These new technologies are going to make it faster and cheaper to move around and make it possible to commute to work from much longer distances, but it's also going to have a major impact on jobs, cities, and the economy.

Here are the three big tectonic shifts to watch:

The technology for self-driving vehicles is already here. Tesla Autopilot was the first big test case, but the world's largest automaker Volkswagen announced at CES 2018 that it will be rolling out autonomous driving to its entire line of vehicles. Still, the first places we'll see it at scale is in taxis and delivery vehicles. This will drive down the cost of rides and deliveries, but it will also eliminate a lot of low-skill jobs--while creating a few more software and engineering jobs.

SEE: Elon Musk and the cult of Tesla: How a tech startup rattled the auto industry to its core (TechRepublic)

Hyperloop is the biggest innovation in transportation in a century, since the commercialization of airplanes. These pressurized tubes are going to unleash faster, simpler, and cheaper travel for both people and freight. We're likely to see the first routes connect major cities in the years ahead, and then spread to other popular routes and bigger challenges like undersea tunnels. This could have a huge impact on real estate, hiring, and how businesses organize teams since it will make it possible for workers to commute hundreds of miles each day.

SEE: Hyperloop One CEO: Here's our roadmap to transform the future of transportation (TechRepublic)

Metropolitan areas are going to remain the centers of jobs and economic activity, but we're going to start drawing much larger circles around the boundaries of these cities as hyperloops make it faster to travel longer distances and self-driving vehicles make it possible to be more productive during your commute. And, there's also potential benefits for underserved communities and economically disadvantaged citizens. For example, one US mayor is considering whether it would be cheaper and more effective to replace bus routes with a fleet of city-owned autonomous vehicles that could provide rides on demand to those who rely on public transportation.

To learn more on this important topic, read our special report "Tech and the Future of Transportation." You can read all of the articles on ZDNet or you can download them in one PDF on TechRepublic, available for free to registered users.