By Larry Dignan for Between the Lines | February 6, 2014 | Topic: Printers

3D Systems said that its 2013 financial results will fall short of expectations as it sacrifices a bit of profit to boost sales and marketing spending and research and development investments. 3D Systems, like other 3D printer players, is racing to scale its business and grab market share so it can cement a good position before much larger players enter the booming industry. 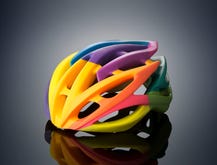 The big question is whether these scale fast bets will pay off. After all, many of these 3D printer players have to get big in a hurry because Hewlett-Packard will enter the market at some point. The thinking among existing 3D printer early movers is that they have to grow to even begin to battle what is a huge HP distribution channel and sales machine.

It's easy to knock HP on 3D printing. The world's largest printer manufacturer missed the curve on 3D printing. Instead, companies like 3D Systems, Stratasys and ExOne have been able to forge commercial relationships and enter manufacturing supply chains. For all the talk about consumer 3D printing, the enterprise drives profit margins for these design and modeling systems, which can run millions of dollars for a unit.

HP could blow up those margins easily no matter how innovative the new players are. That prospect is why early movers want to bulk up in a hurry. In addition, it's quite possible that HP would buy one of the larger 3D printer players just to play catch up. It's also worth noting that Epson and Mitsubishi are expected to be 3D printer players too.

3D Systems profit warning highlights the scale vs. profit conundrum. The company said it will deliver 2013 revenue between $513 million and $514 million. The company's previous range was $500 million to $530 million. December backlog has doubled to $28 million, but the company saw "much stronger professional 3D printers and materials demand and softer on-demand parts and consumer demand during the fourth quarter."

We continue to see the consumer opportunity as over-hyped and believe that the professional and industrial opportunity is only just beginning. The consumer market will cost more to compete in and may be smaller or more difficult to unlock.

But 3D Systems is obviously doing well with 30 percent organic revenue growth for the year and 50 percent sales growth overall (the company has acquired 18 companies since January 2012). CEO Avi Reichental said 3D Systems invested heavily in R&D and sales and marketing at the expense of earnings to grow. "We are willing to tolerate earnings reduction and even slight gross profit margin compression during this period to substantially accelerate our growth rate and market share," he said.

The bet by 3D Systems is logical.

Why the rush to grow at the expense of profits? My hunch is that HP is the reason for the urgency among 3D printer players. HP has the IT and consulting relationships to sell big 3D printers to the enterprise. HP can also squeeze the margins of rivals and still make out well.

When is HP going to make its play? Potentially soon. Wired in December noted HP's 3D printer efforts in the lab. There are a few small 3D printer efforts already underway. HP has the intellectual property and probably could out-patent smaller rivals. At some point, the upstarts are going to have to punch Goliath in the mouth in real combat. If you were in these companies' positions you'd be bulking up at the expense of profits and spending on research and development too.