EE, the first mobile operator to offer a national 4G service in the UK, has provided few details in its financial results of how the high-speed wireless data service is going down with customers, leading analysts to conclude the operator has not made the most of its headstart.

4G is finally here, but how good is it? And does it vary depending on where exactly you are? I took to the London Underground to map out some average download and upload speeds around London, to see how EE's 4G fares.

EE described the uptake of super-fast wireless data as "solid, early 4G momentum" but did not break out 3G and 4G subscriber figures individually in its 2012 results.

"If customer uptake was far ahead of expectation, then we would hear about it. We therefore have to conclude that uptake has not been spectacular. That doesn't make it a disaster, just not necessarily fully optimising its monopoly position," said Steven Hartley, principal analyst at Ovum, in a statement.

EE was the first network in the UK to offer a national 4G service, and by June 2013, EE plans to have 4G available in 65 towns and cities in the UK, equating to 55 percent of the population . But the UK's 4G spectrum auction is now well under way and will result in other operators being able to roll out 4G services for their customers by mid-2013.

The imminent arrival of rivals' 4G LTE services will put pressure on EE to make the most of its first-mover advantage before it has completely disappeared.

At launch its 4G service was criticised for its pricing structure , or more specifically the data allowance  offered on each of its packages. Customers also experienced teething problems, such as being unable to connect to any data services or make or receive texts and calls.

However, with rivals such as Three promising not to charge any premium over its 3G contract rates when it introduces its 4G service later in the year, EE may need to rethink its structure if it wants to gain traction with customers that aren't already locked into an agreement.

"EE has everything in its favour for LTE to be a success: a market starved of high-speed mobile broadband, but high smartphone adoption and data usage; an LTE monopoly; rapid LTE coverage deployment; and a wider range of compatible handsets at launch than any other LTE operator. Therefore, unspectacular LTE uptake will be due to brand and pricing," Hartley said.

According to its results, EE saw a small (2.7-percent) increase in its service revenues for the year ending 31 December 2012 in comparison with the previous year. However, taking into account the change in regulations the company actually posted a 2.6-percent decrease in revenues. 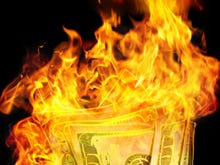 "In the past year, we delivered solid financial performance, underpinned by good progress integrating the business and success in attracting high-value customers," Olaf Swantee, chief executive of EE, said in a statement on Tuesday.

"At the same time, we built a strong platform for growth, launching a new company, new network, new customer brand, new retail estate and being the first to provide UK consumers and businesses with 4G mobile services alongside fibre broadband."

While Swantee remained optimistic about the company's position, the figures painted a slightly different picture. Overall turnover was down 1.9 percent at £6.6bn and despite 4G customers paying an average of 10 percent more on their bills per month than people on non-4G plans, average revenues per user were flat during the fourth quarter — dropping from £18.90 per user, per month in Q4 2011 to £18.60 per user, per month for Q4 2012.

Join Discussion for: 4G: Has EE made the most of its headstart?