Reduce, reuse, recycle. It’s a mantra for those who like to think they are green. Now, if your computer has died, you are not going to get very far on the reduce front – you’ve already bought the computer and will doubtless be buying a replacement. But you can both reuse and recycle.

You might already do both, cannibalising a dead computer for bits you can reuse in your own projects or pass on to others, and, of course, complying with the WEEE directive for the disposal of the remainder.

But author Randy Sarafan thinks there is so much more you can do by way of reusing and recycling old computer parts, and there’s a clutch of ideas in his book, whose full title is 62 Projects to make with a dead computer (and other discarded electronics). 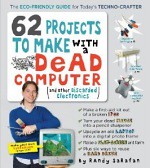 The first point to note is that this book hails from the US so you can expect some cultural issues. The very well put together opening chapter, for example, which talks you through the innards of a desktop computer and explains what resistors, capacitors, diodes and the like are falls over for a UK audience when it starts talking about domestic power supplies.

Still, the main bulk of this book is about the projects and there is doubtless something for everyone here. I’m not entirely sure about the idea of making a lamp shade out of loads of old cables and wire, it looks pretty naff to me, but I do rather like Mr Resistor Man and Mrs Resistor Woman (guess what they are is made from).

Some projects require the use of power tools and extra materials, so they may not be manageable with just the bits and piece you have laying around the place, hence rather countering the reuse and recycle theme, others rely on the dead equipment on its own. If you’ve ever wanted to turn your dead scanner into a composter, make a memo board out of a dead keyboard, turn capacitors into earrings, then you are in luck, as these, and plenty of other ideas are to be found in the book.