A 2-in-1 transformer drone? Coming to a battlefield near you

The Swiss Army Knife of defense drones aims to stake out a hybrid product category in the UAV arms race.
Written by Greg Nichols, Contributor on Feb. 13, 2020 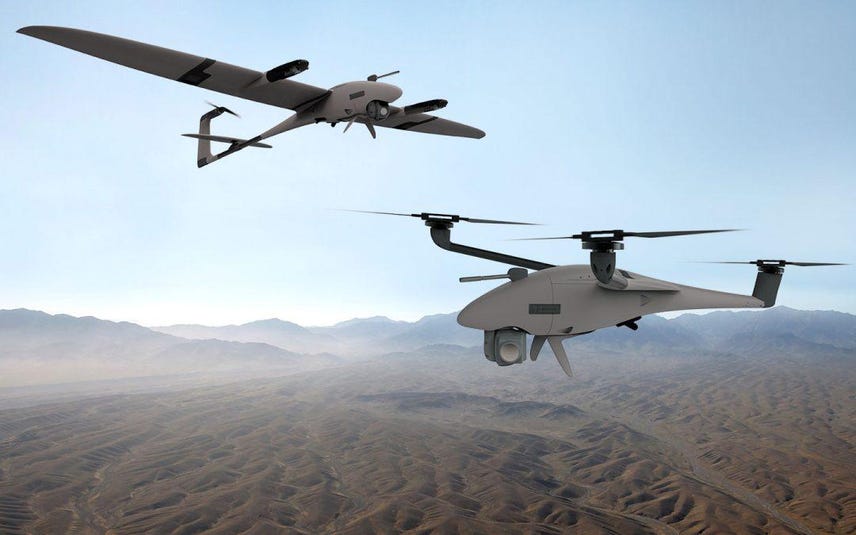 Drones have become ubiquitous in national defense and security applications. They're also becoming more versatile, as a novel new 2-in-1 drone demonstrates.

Built by Quantum-Systems, the drone can be configured as a small fixed-wing UAV or a vertical take-off and landing (VTOL) tricopter. The available configurations make the base system uniquely versatile in an industry that's begun to veer toward specialization.

"Historically, the greatest use of UAVs has been made in the areas of intelligence gathering, surveillance, and battle damage assessment (BDA), where they allow armed forces to avoid placing pilots at risk," wrote Jeffrey N. Renehan in a School of Advanced Air Studies report. "They have also been used to gather nonmilitary information in environments that are hazardous to human beings."

One challenge is that the configuration of a drone largely limits its utility across a variety of use cases. Fixed wing UAV are typically faster, cover greater ranges, and can fly more efficiently than VTOL drones with rotors. But they're also far less nimble, require wide open air space, and must be launched and landed on the UAV equivalent of a runway.

For most end users this doesn't pose much of an issue. A task like infrastructure inspection, where close examination of critical infrastructure may require a drone that can hover in place, will be better suited to a VTOL UAV. Many high altitude surveillance applications, which can require long flight times over large distances, can only be handled by fixed wing UAV.

But for a subset of defense users, such as units that may move from well established bases to roving convoys, there could be great utility in being able to convert a UAV between flying configurations. Having a drone that can conduct long-distance surveillance or deploy quickly to check out an urban environment is attractive.

On the software side, Quantum-Systems has partnered with Auterion, which makes a secure, scalable, open source operating system called Auterion OS. Auterion OS is currently employed on an ecosystem of sUAS from small multi-rotors to hybrid VTOL Group 2 air vehicles.

Deals
The slow death of the iPhone Lightning port