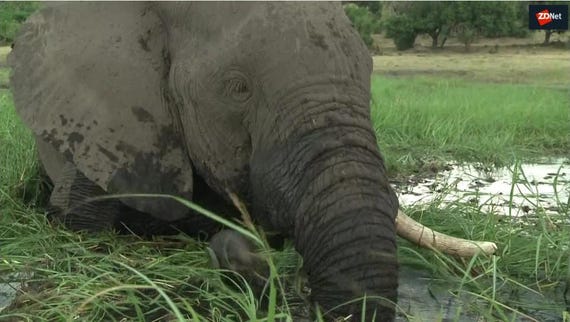 British satellite telecom Inmarsat has joined forces with a Washington DC non-profit called RESOLVE to put its satellites to work on behalf of endangered wildlife in Africa. Though it sounds like a pitch room idea for a Bourne movie, the solution will use AI, satellites, and local cameras to thwart would-be poachers.

RESOLVE has a decidedly technological approach to defending wildlife. The non-profit has developed a system is called TrailGuard AI, which Intel helped develop and which is being funded and deployed by the Leonardo DiCaprio Foundation and National Geographic Society.

TrailGuard AI uses an AI-powered camera to detect humans in nature reserves, with 97 percent accuracy, and instantly transmit images to park rangers' facilities, enabling them to identify would-be poachers and intervene. Inmarsat's network plays a key role. The solution relies on the company's L-band, global, mobile satellite communications network to ensure the transmission of these images to rangers, overcoming the lack of reliable terrestrial connectivity in most remote nature reserves. TrailGuard AI utilizes Inmarsat's mobile BGAN terminals, which are simple to set up and connect to the units and can withstand harsh environments.

"For the TrailGuard solution to work effectively we need rock-solid connectivity, which, in most remote African wildlife reserves, is only achievable with satellite. Inmarsat's global, ultra-reliable satellite connectivity was the only solution that could help us overcome the connectivity challenges we faced and connect our smart sensors deployed out in the parks. This is expected to detect 80 percent of poaching gangs operating in each area, which is by far the most effective strategy based on the resources and manpower available."

The system got its first full-time trial when it was deployed in the Singita-Grumeti reserve in Tanzania in 2018. So far, the system has resulted in the arrest of around 30 poachers, many of whom were caught with bushmeat. RESOLVE is hoping to deploy the system at strategic chokepoints its as identified within 100 African parks with high incidents of poaching.

"Wildlife poaching in Africa is at epidemic levels, but despite the best efforts of dedicated rangers, the large park boundaries and rough terrain mean that they often only find out about poaching when it's too late," says Dr. Eric Dinerstein, Director of WildTech and the Biodiversity and Wildlife Solutions Program at RESOLVE. "The TrailGuard solution acts as an early warning system, transitioning ranger teams into fully mobile, rapid-response units so that they can respond to would-be poachers and stop them in their tracks."

Join Discussion for: A camera and satellite net to stop big game...