Siri cracked under pressure, and Google doesn't have the right stuff. But CIMON may be mission ready. The rocket carrying this bot to Earth orbit has left Nasa's Kennedy Space Center in Florida.
Written by Greg Nichols, Contributor on June 29, 2018 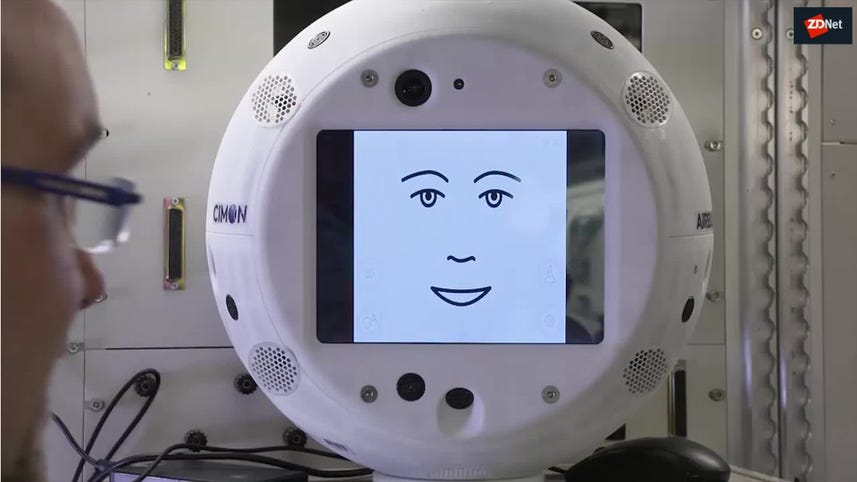 A floating orb will be the first AI assistant to help humans in space.

Let's get the low-hanging fruit out of the way: "I'm sorry, Dave. I'm afraid I can't do that."

Developed by Airbus in partnership with IBM, the Crew Interactive Mobile Companion (CIMON, for short) weighs eleven pounds and will act as a kind of floating brain to assist astronauts during mundane mission duties.

Read also: Exomedicine arrives: How labs in space could pave the way for healthcare breakthroughs on Earth

It's already launched as part of a cargo shipment that weighed about 2.7 tons and included food and water. The cargo is in a Dragon capsule that will detach from the Falcon 9 and dock with the ISS on July 2. It's expected that CIMON will return to Earth on Dec. 12.

Roughly the size of a basketball, the 3D-printed plastic and metal orb weighs 11 pounds on Earth and runs a modified version of IBM's Watson. Astronaut Alexander Gerst tested the device. During mission tasks aboard the ISS, Gerst will view procedures on CIMON's screen.

As the astronaut advances through the steps of the tasks, CIMON will track his progress and make suggestions on how best to proceed. And, like tabletop assistants, CIMON recognizes speech, has a synthetic voice, and is capable of some interaction.

It's been trained to identify Gerst via facial and speech recognition. By now we're used to that functionality here on Earth, but in space the interactivity could have far greater relevance.

With CIMON, crew members can do more than just work through a schematic view of prescribed checklists and procedures; they can also engage with their assistant. In this way, CIMON makes work easier for the astronauts when carrying out every day routine tasks, helps to increase efficiency, facilitates mission success and improves security, as it can also serve as an early warning system for technical problems

Crucially, CIMON may also have a psychological impact during longterm small group confinement aboard the ISS. The experiment is being monitored closely by international space agencies.

So compelling was the idea that CIMON may become a companion to the astronauts that Airbus enlisted Gerst to weigh in on the selection of the face and voice.

The face, at least, reminds me a bit of Rethink Robotics' Baxter.

Gerst and CIMON are expected to work together a total of three times, including on a task that my personal tests have proven is impossible on earth: solving a Rubik's cube.

Internet of Things
The iScanner app puts a powerful, AI-based scanner in your pocket