Full Bio
Posted in Robotics on June 16, 2020 | Topic: Coronavirus: Business and technology in a pandemic 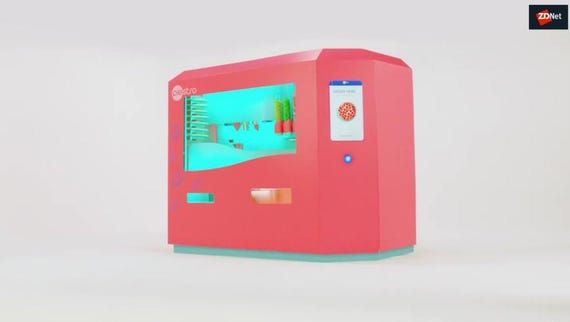 Will people really want to get their pizza from a robotic vending machine, as a new food automation company called Piestro is betting? Yes, yes they will, and here's why.

As anyone who pays attention to the food and beverage space can attest, the age of non-sucky vending machine food is coming. Depending on where you live, you may already be able to get a fresh-tossed salad from a robot named Sally and a really good pull of espresso from one of Cafe X's robotic baristas.

Automation in food preparation is hardly new. Even before COVID-19, the economics of the restaurant industry were grim, and savvy entrepreneurs have long sought to bring new efficiencies to the process. That led to grand experiments like Zume, an automated end-to-end pizza restaurant and delivery service that primarily used robots instead of humans. Once valued at a jaw-dropping $4 billion (!), the company recently shut down its robot-powered pizza business, laid off more than half its staff, and is shifting focus to autonomous packaging.

What would have happened had Zume hit its autonomous pizza delivery stride just as COVID-19 was forcing social distancing and shutting down restaurants? It's impossible to say, but it seems realistic that that side of the business would have thrived.

But autonomous vending machines? That's a model that's already proofed, as any Snickers-sneaking, soda-guzzling patron can attest, and it's a far simpler proposition for companies to launch than the model Zume envisioned. There's long been resistance in the West to automated dining concepts, in large part because of customer expectations of service and interaction. Anyone who's traveled to Japan, where orders are frequently placed on electronic interfaces and food vending machines are prolific, can attest that the same emphasis on the personal touch doesn't hold. It's a safe bet we were heading in that direction in the U.S. anyway, but the pandemic has changed the paradigm practically overnight. There's now an expectation of distance and hyper-sanitized transactions.

Piestro, which is currently raising money via crowdfunding site StartEngine, is the latest entrant. The company is producing a standalone, fully integrated cooking system and dispenser, creating an automated pizzeria that combines fresh ingredients and custom recipes to build what the company says are high-quality pizzas.

As take out, delivery and quick access to food are more in demand than ever, a pizza kiosk suddenly seems like a pretty realistic proposition.

Piestro is not the only game in town. A company called Basil Street recently raised $10 million for its pizza vending machine and another, API Tech, has is already operating hundreds of pizza kiosks across Europe.

Based on advanced robotics, precise dispensing, and temperature sensors, Piestro is hoping its cutting edge technology will provide a competitive advantage by quickly producing pizzeria-quality pies. Piestro utilizes a temperature isolation system that keeps the toppings and dough at proper temperatures separated from the heat of the oven located below. Future versions of Piestro will also make use of dual heating element ovens to quickly produce perfectly cooked pizzas.

"Growing up in Italy, I developed a fascination and love for food that became more than a career–but a lifelong passion," said Massimo De Marco, CEO of Piestro. "Our technology keeps the authenticity of recipes alive and ensures consistent taste and texture every time a pizza is dispensed. There is no reason we should lose the local recipes we've come to love or the ability to discover or create new favorites; we can bring automation to the industry and help businesses thrive."

Join Discussion for: A pizza vending machine for a new reality