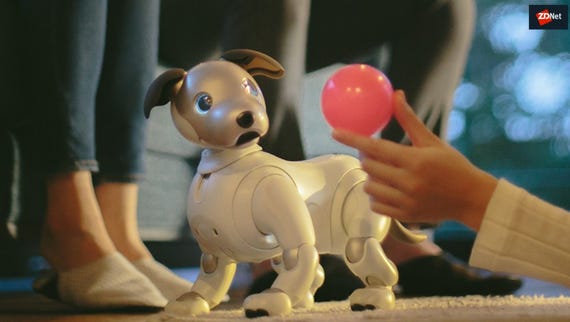 Video: Sony's updated Aibo robot dog could set you back $3,000

Researchers at Newcastle University have discovered that praying mantises, the only insect known to have 3D vision, see the world far differently than other animals able to perceive depth.

Most animals with stereo vision evaluate the distance of objects by comparing slight variations in images captured with each of their eyes.

When I open and close my right and left eyes in sequence, the coffee mug across my desk does a little side-to-side dance (and my office mate glances at me askew).

When I open both eyes, the two mug images are unconsciously matched up, revealing a 3D picture. My brain has done a nifty trick of fixing the distance of the mug relative to the other objects on my desk.

That perceptive ability is the foundation of our sight-based navigational skills, so it stands to reason that robots hoping to navigate complex environments would also benefit from stereo vision.

Some great solutions exist, but getting the form-factor small enough to fit on, say, a small drone or a flying robot the size of an insect presents a huge challenge. That's because algorithms for rendering stereo vision require a tremendous amount of computer power.

The Newcastle researchers wanted to know how the praying mantis, with its tiny brain, handled the task.

To investigate, they equipped their test mantises with tiny glasses featuring red and blue lenses. The glasses were affixed with temporary glue made of beeswax.

The researchers tested the mantises vision by simulating prey on a screen. The tests mirrored those carried out to investigate human 3D vision. The images on the screen, seen without the glasses, look like the familiar fuzzy bi-colored images you see when you accidentally stumble into a theater featuring a movie in 3D.

What the researchers found was that the mantis only see objects in 3D when they're moving.

Humans, if you'll recall from my own experimentation, can marvel at the contours of a mug on a desk in full stereo splendor.

It makes sense that mantises evolved to use stereo vision only in instances when they're looking at potential prey. Thanks to their ability to gauge depth in a moving object, they can nab flying insects out of the air.

And by not seeing the foreground and background scenes, the mantises are both better able to target their prey and drastically cut down on the computing power humans would use staring at the same scene.

The results, which are in the latest issue of Current Biology, could provide a template for equipping flying robots with low-power, resource-minimal stereo vision.