Surgeon. Anaesthetist. Nurse. Patient. Robot. These days, not everyone in the operating room is human.

Traditionally, for many procedures, patients would be opened up with large incisions during surgery. Laproscopy -- also known as keyhole surgery -- made those incisions far smaller. Now, in a growing number of hospitals around the world, surgeons are getting extra support from robotic systems that allow them to carry out precise procedures through tiny openings in their patients' bodies, giving less scarring and a shorter recovery time.

Dr Mark Soliman, a consultant surgeon at the Florida Hospital Cancer Institute, uses the da Vinci system by Intuitive Surgical for colorectal surgery. Before the advent of robotics, he had only his own two arms at his disposal. Now, with the robotic system, he's got four robotic ones to use instead -- one holds a camera, while the other three can hold traditional surgeons' tools, like scissors or a scalpel.

An Apple a day?: HealthKit and the future of medical data UK citizens should be able to provide their own data to their personal health records in the next two years. Is that good news for Apple?

Soliman uses the system for colon and rectal cancer surgery, with the machine allowing him to more easily navigate around the crowded, tight areas where the organs lie.

"What interested me was I needed a solution to help me with the more difficult and more complex operations that I was doing... The robotic instrumentation allows more precise access to these confined spaces," Soliman said.

The surgeon started to use the robotic system as a way of preventing hernias in patients, by carrying out procedures without opening up patients in the traditional way. However, he found that his patients were going home quicker, experiencing less pain from the operations, and getting back to work in less time.

Dr Jayram Krishnan, a urology surgeon who uses the da Vinci system in bladder and prostate surgery at the Cleveland Clinic, has also seen shorter recoveries: "Because incisions are smaller, the surgery is faster, and patients can make a full recovery faster. Their time down is significantly less than if they were to have open surgery."

Other robotics systems are also working to minimise the damage done to patients during procedures. Medrobotics' 'snake robot' offers a joystick-operated flexible robot that can be piloted to parts of the body that would otherwise require invasive procedures to access, such as the base of the tongue or parts of throat. The robot can then do a "diagnostic or therapy that otherwise would have required a horribly invasive incision to get to," said Howie Choset, Carnegie Mellon robotics professor and Medrobotics' cofounder.

Choset cited the example of an operation carried out recently at the University of Pittsburgh, where the surgeon "was able to remove cancer off of the epiglottis of a 75-year-old man. Normally, this procedure would have required that this man had his jaw broken so they can pry it open and get to the cancer," he added.

Robotics has advantages not only for those going under the knife, but also for those wielding the knife. Rather than be stood up bent over the patient for hours at a time, with robotics the surgeon can sit down at a console and let the robotic arm do the heavy lifting.

There's a learning curve for a surgeon to make the change from open or laproscopic surgery to mastering robotic systems, according to Soliman and Krishnan. They must get used to the controls on the surgeon's hands and feet, for instance. "Initially it's a challenge, because there's so much going on," Soliman said.

It's not a simple job to learn, and one that the surgeons say takes around 35 to 40 cases for practitioners to get used to, but once they have, the robotics are like an extension of their own arms. And with the robots' wrists able to turn further than a human's, surgeons can operate with a greater degree of precision, allowing them to spare delicate structures like nerves and blood vessels, or when removing a tumour, leave as much healthy tissue behind as possible.

That ability to distinguish healthy tissue from tumour could take a step further in future: Choset's group at Carnegie Mellon is working on adding more of that to robotic surgery: "What my group, and others are working on, is restoring that situational awareness that was lost when we went to minimally invasive surgery.

"We're developing algorithms that would allow the physicians to see in three dimensions, but feel what's going on as well [using a robot]... we'll provide information about how soft or hard the organ is -- you can poke the organ and get that feeling for where the hard stuff is. You get all that feel that you could not have had unless you were in open surgery," Choset said.

Krishnan also highlights the visual advantages of using robotics to augment the surgeon's own senses. "Using the robotic surgery is really superior, being able to see the edges [of structures in the body], and everything around, is better with the HD magnification," he said. The da Vinci, for example, offers 10x times magnification.

The response from patients to the robots can be mixed, however.

"Some get excited because I'm going to be using a robot, but some are hesitant too, because they think it's a robot going to be doing the operation. But I tell them no, it'll be me doing the surgery, but I'll be using robotic arms," Soliman said.

Robot surgery is not without its costs -- and its risks. According to the ECRI Institute, a medical research organisation, each robotically-assisted procedure costs between $3,000 and $6,000, and there have been 144 deaths during robotic procedures between 2000 and 2014, though it's not clear how many can be directly attributable to the use of robots rather than to the inherent risks of surgery. 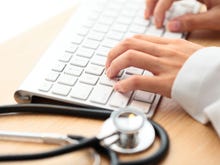 The Google doctor will see you now: Search giant trials online medical consultations The next time you research symptoms for an ailment online, Google may recommend you see a doctor.

Though the procedures are expensive, it's not just patients in big city hospitals in the US or UK that could potentially be seeing more robot-assisted surgeons. In future, it's conceivable that isolated areas where skilled surgeons are scarce could have robotic systems that could be operated by remotely by medical personnel thousands of miles away.

On the technical side, the problem of latency -- the delay between the surgeon making one movement in one country and the robot making the corresponding movement in the other country -- must be solved before the practice can become common.

Just as importantly, there are also questions to answer about liability in the event of something going wrong, as well as emotional issues to be dealt with. For patients used to shaking the hand of their surgeon before they go under the knife, ostensibly trusting their lives to a robot may not come easy. Similarly, remote locations may not be able to offer the right care a patient needs after, rather than during, the operation.

However, the surgeons believe that it's something that merits further attention.

"Originally this kind of surgery was developed for telemedicine -- where a surgeon can be somewhere else and be doing surgery, and that really never took off... But I think it can be used in a training situation. I could be training a surgeon in Asia, for example, from here, where I can be following them during their whole surgery, through my own console, so I'm with them at the same time. I think that's the future -- being able for me to do surgery in Asia under the guidance of another surgeon who's there," Krishnan said.

"Remote surgery would be amazing. From the technological standpoint, it's something that should be looked at, and I think that's where robotic surgery began -- for remote surgery, with a robot that could be docked to a patient on the battlefield and I could do surgery remotely. It hasn't really turned into that, because of latency issues and whatever else, but it's something I would love to see developed further," Soliman said.