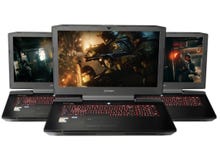 Top Windows 10-powered alternatives to the MacBook Pro Those who want a Windows-powered laptop don't have to feel jealous of those who choose the macOS path, because there are some truly awesome Windows 10 laptops available.

Until now the miniature laptop has only been available to backers of its crowdfunding campaign on Indiegogo. The concept of a handheld laptop running Windows 10 or Ubuntu proved popular despite the cramped keyboard. The campaign breezed past its $200,000 target to raise just under $3.5 million.

The tiny laptop was available to backers for $399, instead of the planned retail price of $599, and is now from GPD's Aliexpress page for a pre-order price of $500.

It features one USB Type-C port, a USB Type-A port, an HDMI port, and 3.5mm headphone jack. The device comes with a speaker and microphone, but no built-in camera and no microSD slot, however the Type-C port can be used for charging and expansion.

It weighs 480 grams and measures 180 mm x 106mm x 18.5mm (7.1" x 4.2" x 0.7 inches). The device resembles a squished MacBook Air when closed. To cram a keyboard into such a tiny space, GPD has opted for a slightly strange keyboard design and used a trackpoint instead of a touchpad. The touchscreen is the other main input.

GPD has made a few Android-based handheld gaming consoles, and last year released the Windows 10 GDP WIN console with a keyboard and gaming buttons. The GPD Pocket is the company's effort to bring the same mobility to a conventional laptop.

Join Discussion for: A ​Windows 10 PC that fits in your pocket:...