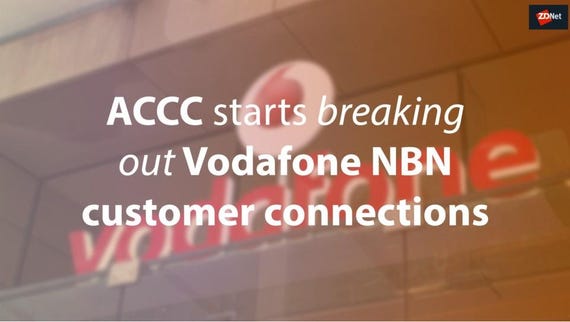 The Australian Competition and Consumer Commission (ACCC) has provided some insight into what technologies customers on Vodafone are using to connect to the National Broadband Network.

The latest Wholesale Market Indicators Report to the end of March shows Vodafone has just under 17,000 fibre-to-the-premises customers, 2,650 on fibre-to-the-basement, and just over 10,000 on hybrid coaxial-fibre.

For fibre-to-the-node, Vodafone Australia numbers were lumped into the Other category, which sits at just over 2% of all customers at 54,000.

In its latest yearly earnings, Vodafone disclosed having 33,000 NBN customers.

Overall, more than half of all NBN customers are now on a 50Mbps plan, after the network crossed the threshold of having a majority of customers on 50Mbps and 100Mbps plans last quarter.

"Although the number of consumers on [12Mbps] plans has dropped, they still account for a significant number of NBN users," ACCC chair Rod Sims said.

"We would be concerned if the options to acquire entry level plans declined, either through availability or higher prices. Indeed, we continue to have concerns about the impact of NBN pricing changes on affordability of entry level plans for those consumers who only require a basic service."

Earlier this month, TPG continued its run of taking out the top spot in the ACCC's speed-monitoring report.

The ACCC also recently announced it was opposing the prospective merger between TPG and Vodafone Australia.

The consumer watchdog said it believed the merger would substantially lessen competition, and that TPG had the commercial incentive to roll out a mobile network.

"TPG is the best prospect Australia has for a new mobile network operator to enter the market, and this is likely the last chance we have for stronger competition in the supply of mobile services," ACCC chair Rod Sims said.

"Wherever possible, market structures should be settled by the competitive process, not by a merger which results in a market structure that would be subject to little challenge in the future. This is particularly the case in concentrated sectors, such as mobile services in Australia."

In explaining its decision, the ACCC pointed to Australia's concentrated mobile services market, with the three network operators, Telstra, Optus, and Vodafone, boasting over 87% market share. Similarly, it said the fixed broadband market is concentrated, with Telstra, TPG, and Optus having approximately 85% share.

The announcement was posted earlier than was intended on the ACCC site, with the Commission pointing the finger at its content management system.

Although 91% of the total volume of data downloaded is through fixed-line and wired connections.

With the gap between basic 12Mbps plans and 50Mbps plans closing, the ACCC questions the fairness of NBN plans compared to existing ADSL plans.