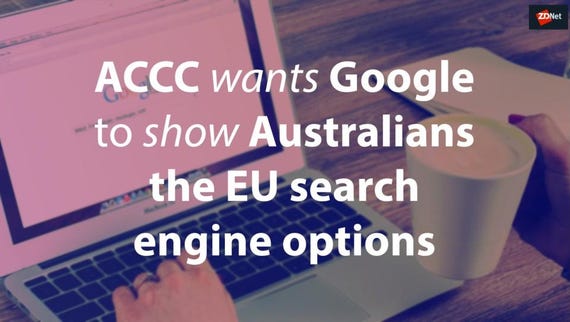 The Australian Competition and Consumer Commission (ACCC) wants to put an end to the monopoly Google has in the search engine market down under, asking the tech giant to offer consumers a choice of which platform they use to search.

According to the ACCC, Chrome comprised 49% of the Australian browser market in 2018.

"Google has substantial market power in the supply of search services and in the supply of search advertising. The ACCC identified customer inertia as a barrier to expansion and considered that that customer inertia is reinforced by a default bias that exists with Google Search being the default search engine on a number of internet browsers, and Google Chrome being the default internet browser on a number of operating systems," the ACCC said.

The remarks were made in the watchdog's Digital Platforms Inquiry: Final Report [PDF] that made 23 recommendations spanning competition law, consumer protection, media regulation, and privacy law that it said reflects the intersection of issues arising from the growth of digital platforms.

In one of the recommendations, the ACCC called for changes to search engine and internet browser defaults.

"Google should provide Australian users of Android devices with the same options being rolled out to existing Android users in Europe; that is, the ability to choose their default search engine and default internet browser from a number of options," the ACCC wrote.

Google in March announced that it would do more to ensure that Android phone owners in the EU were aware of the "wide choice of browsers and search engines available to download to their phones".

In April, the search engine giant then said it was going to start presenting new screens to Android users in Europe with an option to download search apps and browsers.

The ACCC pointed to a similar function now being available in Russia, following a decision by the Russian Federal Antimonopoly Service that Google had restricted competition in the market of mobile applications by placing restrictions on the manufacturers of mobile devices with access to the Google Play application.

If Google does not introduce similar options for Australian Android users by 26 January 2020, the ACCC said it will submit to the government that it should "consider compelling Google to offer this choice".

"The ACCC considers that offering this choice screen for Australian consumers, for both search engines and internet browsers, would improve consumer choice and be pro-competitive," it wrote.

The specialist digital platforms branch, established within the ACCC, would "build on and develop expertise in digital markets and the use of algorithms".

The ACCC notes that this proposal would not apply to third party search engines and internet browsers, but that the specialist digital platforms branch could also monitor any further developments in the browser market, including the competitive impact of commercial arrangements between Google and suppliers of search services and internet browsers, and if necessary, take enforcement action and/or make recommendations to the government.

After a consideration of these requirements, the ACCC said that the likes of Microsoft [PDF] raising concerns during consultation would "further entrench dominant companies by reason of their strong brand recognition", which it said would raise barriers to entry and expansion of smaller rivals who would no longer benefit from being installed as default search engines or browsers on some devices.

The ACCC decided not to proceed with this recommendation, and instead revamp it to focus on Google providing Android users with the browser option.

According to StatCounter, as of June 2019, Android is used by 42.6% of smartphone and tablet owners in Australia, while Apple's iOS holds a 56.79% market share.

Join Discussion for: ACCC wants Google to show Australians the...