Acer has established itself as a maker of smartphones running both Android and Windows Mobile. The company has yet to commit itself to Windows Phone 7, but is firmly behind Android, and has recently announced two new (as yet unpriced) additions to its portfolio, the liquidmini and the beTouch E210 — both of which I've got in my possession.

The beTouch E210 updates a previous model, the beTouch E130. It takes Android 2.2 and puts it into a chassis which is unashamedly inspired by RIM's BlackBerry. There's even an optical trackpad sitting between the mini-QWERTY keyboard and the screen, and very responsive it is, too. 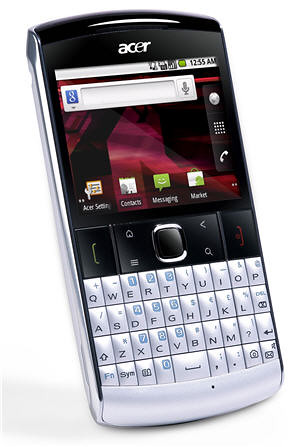 The result, though, is a strange mélange that does not quite work. The keyboard is very nicely made, with large, domed keys that are easy to hit and I could tap out email and SMS messages at a decent speed. Usefully, Acer has put Fn key links to £, €, and @ symbols on the keyboard, and placed dedicated keys for the 3.2-megapixel camera and messaging app on the bottom row.

The smartphone specifications are fine too, with GPS, HSPA (7.2Mbps downstream) and Wi-Fi (802.11b/g) all present. There's an FM radio, too. On the downside, the processor runs at only 600MHz, while ROM and RAM are just 512MB and 256MB respectively. The 2GB microSD card that's supplied sweetens the pill a little though.

The big problem with the Acer beTouch E210 is its screen, which is resistive. This means it needs more finger pressure than a capacitive screen, which is the more popular technology these days. That's not the worst of it, though.

The big problem is that the display's 320 by 240 pixels are presented in a screen measuring just 2.6 inches across the diagonal. Android just wasn't made to fit into these dimensions and screens often display poorly. Even the initial setup routine requires a lot of vertical scrolling, and in everyday use it's just too irritating.

The liquidmini is an altogether different proposition. It looks much more like a standard Android smartphone, albeit a small one. It has a 3.2in. screen and with a slightly more respectable 320-by-480-pixel resolution. The screen is capacitive and much more responsive than that of the beTouch E210. 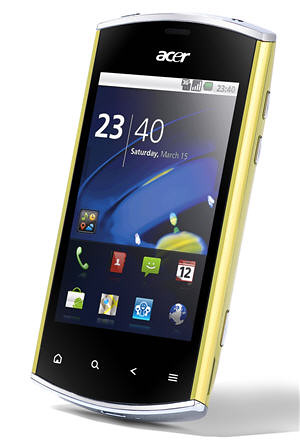 The liquidmini runs Android 2.2 and has the same 600MHz processor as the beTouch E210, but a little more memory with 512MB of both ROM and RAM. It comes with a 2GB microSD card, and Acer also provides a slipcase.

As its name suggests, the liquidmini is small, measuring just 110.4mm by 57.5mm by 13mm and weighing 109g. It's perfect for smaller hands and pockets, although that screen size means it's not ideal for video viewing, web browsing or other media-rich activities.

The liquidmini comes with various coloured sides and backplates. Acer calls them "jet silver, royal blue, piano black, lime green and light pink". It has DLNA support for media sharing (just photos and video, not working document files), plus HSPA (with 7.2Mbps download), GPS and Wi-Fi. The camera is a 5-megapixel unit.

The liquidmini sports Acer's special Android skin. This is a relatively convoluted affair that separates the five screens of widgets from a multi-part main screen. To get to the widget screens you hold down the Home button. The default home screen offers quick access to recently used apps and a selection of eight app shortcuts. The system works, but it feels a little heavy-handed and makes widgets a little harder to get at than they ought to be.

In a phone world that's fast becoming dominated by Android, competition is tough. The liquidmini may struggle to get a toehold in a crowded category. The beTouch E210 stands more chance of success on paper, but the screen really lets it down.

Pricing wasn't available for either handset at the time of writing, but I'd expect both the beTouch E210 and liquidmini to be lower-cost smartphones.